We count on good financial outcomes, 20,000 dinars for pensioners for the winter 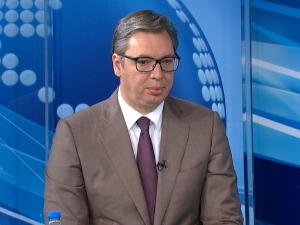 Aleksandar Vučić, as a guest in the RTS daily, announced the payment of 20,000 dinars to all pensioners in February, at the beginning of March at the latest. He pointed out that no special applications will be needed for that money.

He pointed out that GDP growth of about seven percent is expected this year, and the budget deficit is significantly smaller than planned. Vučić stated that Serbia had a surplus of 60 billion dinars in June and July, and the total surplus in the first seven months of this year was 198 billion, although the rebalance previously envisaged a “surplus in cash” of only 38.5 billion, which approved by the IMF and the Assembly.

He also explained that, when they add up this year as well, Serbia will have a growth of plus six percent, which, as he claims, no one in Europe will have. “That means that in these two years together we will be the most successful on the continent, and only this year among the top three in terms of growth rate,” Vucic added.

“We want to repay the pensioners, because they have always understood the state,” Vucic explained.

Increase in pensions and minimum wage

He pointed out that at the beginning of next year, a new increase in pensions will follow, over five percent.

He also announced an increase in the minimum. “Our idea is for the minimum to be 35,012 dinars, more than 300 euros,” the president stated.

He expects that the average salary at the beginning of next year will be 613 euros.

About the “Open Balkans”: A historic decision, much needs to be done

Speaking about the regional initiative “Open Balkans” and the agreements reached in Skopje, the President said that he considered it a historic decision, and whether it would be implemented – “it is another matter”.

“A lot needs to be done in order to be able to do that by 2023,” the president pointed out, adding that PDF systems, providing information, and customs regulations must be harmonized.

He stated that 5,300 companies from Serbia work in Northern Macedonia.

“It is an idea of ​​peace and stability, which was not imposed on us from the outside,” Vucic assessed.

As for the admission of other countries to the initiative, the president said that the door is open for everyone, but that “we are never chasing anyone anymore”.

About the situation in BiH: Serbia will always be with the people in the Republika Srpska

Speaking about the events in Bosnia and Herzegovina, Vučić states that Serbia will do everything it can to preserve peace and stability.

Vučić pointed out that it is not good to impose something from the outside, and that it is never well received in the Balkans, so the implementation of decisions is never good enough.

He announced that the most serious crime of ethnic cleansing after the Second World War, the persecution of the Serbian people in Operation Storm, would be marked in Belgrade on August 4, and that the entire leadership of Republika Srpska would attend the celebration and talk to them.

The President of Serbia said that he would tell them three things:

“Under one, we must keep the peace, under two, Serbia will respect the Dayton Peace Agreement, the integrity of BiH, but also the integrity of Republika Srpska, and under three, Serbia will always be with the people in RS and help in every way. These are important things that “Serbia will express itself at any moment,” Vucic concluded.

“FBI did not participate in the investigation against Belivuk”

Reacting to the allegations that the FBI participated in the action of monitoring Belivuk, the President of Serbia pointed out that in that case there was no participation of the American Federal Bureau of Investigation and that the service did not submit any information regarding this case.

“Everything was done by our authorities, the police and the BIA,” Vucic said in the RTS daily and congratulated them on their courage to conduct such a serious investigation.

He congratulated the prosecution and all prosecutors in Serbia who worked on writing the 322-page indictment with all the evidence, which, as he said, was extremely hard work.

“Everything we did with the exception of support and joint work on certain exhibits with European services was done by our authorities. The FBI did nothing,” Vucic underlined.

The FBI informed us about the ANUM application that they produced and that the criminals thought was safe, but in fact it was under the control of the CIA. They informed us about it, but when it was all over, the president mentioned.

He added that he assumes that Stefanović may have been wrong because, as he said, our media were also wrong.

“Only our services worked on the Belivuk case,” Vucic pointed out, adding that he wanted to thank all those heroes, police and members of the BIA, who managed to install and place eavesdropping devices under the cars of members of the Belivuk and Miljkovic groups.

“Vulin and I are filing charges against ourselves”

The President of Serbia announced tonight that he and Aleksandar Vulin will file criminal charges against themselves in order to respond to “all the lies of members of the mafia clan, but, as he said, also tycoon politicians”.

“We have made a decision. Tomorrow, as in the case of Jovanjic, we will file a criminal complaint against ourselves. We will find one of our colleagues to do that, in order to present everything that those people said, but also ‘tycoon politicians’,” he said. Vucic.

Visiting the RTS Daily, he emphasized that he and Vulin are ready to answer all questions.

“I am ready to humiliate myself in such a way that I go to the polygraph. I hope that then some others will be able to go to the lie detector to answer questions ‘about their lies and robbing the people,'” the president said.

The president said that it would be seen if he was in an apartment in Zvezdara, as well as if it was claimed whether he had any contact with those persons.

“Then all lies will be dispelled, because the people know who stood by the mafia’s neck, who is the one who opposes the mafia, and who is the target, and who is mentioned, as well as who is the main culprit for the complete collapse of the mafia. is the most important interest of the citizens, and that is that we do not have such murders and that there is no mafia, “said Vucic.

He also pointed out that seven months had passed, that is, that the eighth had started, and that there had been no attempted mafia murder.

“Show me any other country where the same is the case. Many are telling us about organized crime, and in their countries they are killing journalists and anti-corruption fighters. It will not happen in Serbia,” the president underlined.

Vučić pointed out that the indictment is something that shows people that the mafia can never win, and that murderers cannot be free, as well as that the crime will not go unpunished.