We’ll speak after I get again from the highway, the regulation will apply equally to everybody 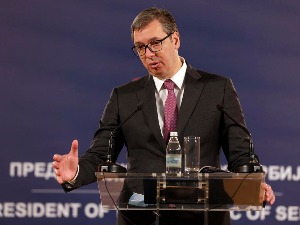 “Everyone involved in criminal activities will be held accountable for that. I don’t think anything good about Diana (Hrkalović), I have a better opinion of Nebojsa, we will talk at party bodies,” Vučić said as a guest on TV Prva.

Answering the question whether Stefanović will stay in the party and the Government of Serbia, Vučić said that “it depends on him (Stefanović, note) the most”, adding that this will be discussed in the coming days when he returns from the road.

“It does not occur to me to lead a chase and harangue against someone from my party. The law will apply equally to everyone, that is the conclusion,” said Vucic, emphasizing that Stefanovic had done a lot of good for the party in the past and would discuss tome.

Vučić: Serbia only for the borders determined by UN decisions

Aleksandar Vučić reiterated that Serbia exclusively supports the principle of immutability of borders in accordance with the UN decision, and stated that in that sense he introduced an amendment to the proposed conclusions of the Summit “Brdo-Brioni” – that Serbia is against changing borders, in accordance with the UN Charter and decisions of UN bodies.

“They sent me a proposal for the conclusions of the Summit, which states that we should all oppose the change of borders together. I introduced a small amendment and that is now hell for them,” Vucic told TV Prva.

He reminded that Vjosa Osmani, Zoran Milanović, Milo Đukanović, Šefik Džaferović will also participate in the Summit on Monday … and that they all agreed with that proposal, and then sent it to him to agree.

“I added an inserted sentence and said – yes, but that it is in accordance with the UN charter and the decisions of any UN body. And that will not be accepted, because it would mean Kosovo as part of Serbia,” Vucic said.

He stated that he would go to Brdo near Kranj dressed ceremoniously, that there would be “greats of the Balkan political scene” who would say what they think, and think the worst about Serbia, while his job is to protect and defend Serbia, and to see that he gets the most which can for our country.

He added that he was not angry at the conference with Pahor today, but polite, but he told the truth, and as he says, he is convinced that the citizens have nothing to complain about.

“I’m at the end of my term, and I’ve said what I’ve said a million times. But they haven’t learned to have someone say it to their face, openly. What can they do to me? To invest more money in my shift? What else can they do against it?” “They? They invested billions against me, so what?” Vucic asked.

Vučić asked when the Western powers started to apply that principle of the immutability of the borders of ’90. and or ’91. later or in 2021, because, as he stated, the borders of the state of Serbia were changing at that time.

After Palestine and Lebanon, militants from another country launch rockets at Israel – Latest News