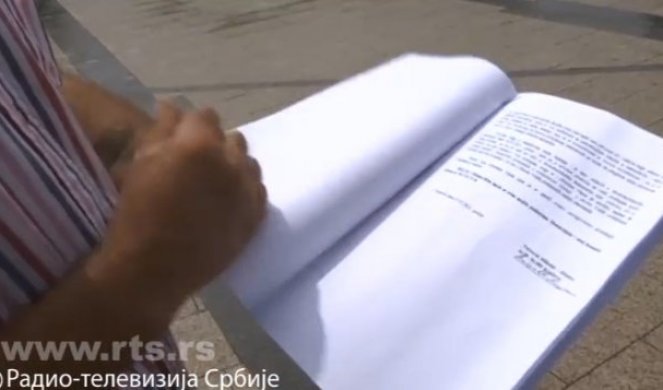 He and his wife found an invitation to discuss Milutin’s flag in the yard.

“The woman was reading, when I looked at the woman, she was all blonde, blue. She read it once more and said I became a widow,” says Milutin Petrović from Sibnica near Kraljevo.

First of all, they turned to a notary. Unsuccessful. Then they hired a lawyer, but he, too, was not lucky enough to challenge the power of attorney he submitted. They also tried to find out in court who initiated the probate proceedings and on what basis, again without success. He eventually filed a criminal complaint against the unknown person.

According to the law, the procedure of probate hearing is initiated when the registry office submits an excerpt from the book of the dead to the court. But in addition, the initiation of that procedure can be requested by the family and relatives, but also by any other person who proves that he has an interest in it. And that is exactly what happened in this case.

“The proposal for initiating probate proceedings was submitted by Banka Poštanska štedionica, with the submission of the Agreement concluded with Milutin Petrović from Sibnica, which proved its legal interest in initiating the same. Along with the proposal, it submitted the decision of the Basic Court in Kragujevac that the lawsuit was rejected. against Milutin Petrović, because he passed away “, states the Basic Court in Kraljevo.

On the basis of which the court in Kragujevac determined that Milutin Petrović passed away and whether it was the same person, the authorities will determine. Until then, the question remains why the court, which originally conducted the procedure, and the notary public in Kraljevo, to whom the job was entrusted, did not try to get an excerpt from the death register. And both bodies were authorized for that.

“During the procedure, the notary public is authorized in accordance with the Law on Out-of-Court Procedure to obtain the necessary data and documents from the competent authorities, including the registry offices, which should have been done in this case,” said the Basic Court in Kraljevo.

Notary Miroljub Stanisavljevic from Kraljevo says that he received the case file in which there was no excerpt from the book of the dead, but an earlier decision of the Basic Court in Kragujevac, from 2019, which rejected the bank’s lawsuit as inadmissible due to the statement that the defendant passed away.

“As a notary public, I conduct probate proceedings according to the court’s decision, after the court determines that the testator’s death occurred,” Stanisavljevic added.

The case was returned to the Kraljevo Basic Court, which will, as they say, reject the bank’s proposal to initiate probate proceedings.