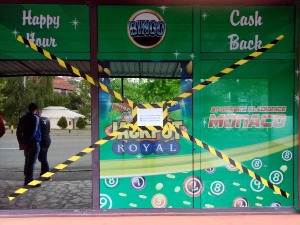 In a joint action of the Ministry of Finance – Gambling Administration, Security-Information Agency, Higher Public Prosecutor’s Office in Novi Pazar and the Ministry of Interior, a number of illegal betting and gambling houses in Novi Pazar were discovered, where games of chance, betting and games on luck on slot machines without the approval of the Gaming Authority.

Due to the unauthorized organization of games of chance, 17 facilities were closed. On that occasion, 85 slot machines and roulettes, 210 televisions, 22 computers, 10 monitors, 18 printers, as well as over 650,000 dinars and 3,700 euros were seized, the Ministry of Finance announced.

Due to the existence of grounds for suspicion that they committed the crime of unauthorized organization of games of chance, I. was arrested. S. and he was ordered to be detained for up to 48 hours, while he is against M. S. and N. B. warrant issued.

By illegally organizing games of chance, these persons have gained illegal property gain of over 120 million dinars (one million euros) and damaged the budget of the Republic of Serbia in the amount of over 24 million dinars (200,000 euros) in the last year alone.

Members of the Police Administration of Novi Pazar will file criminal charges against those who organized games of chance, without the approval of the Administration for Games of Chance, to the competent public prosecutor’s office.

The implementation of intensified activities on the suppression of illegal gambling will continue in the following period, it is emphasized in the announcement.