A convincing victory, we received all 10 seats 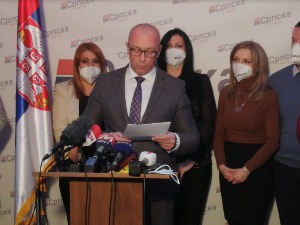 At the press conference, Goran Rakić said that the Serbian List achieved a convincing victory and won 10 seats in early parliamentary elections in Kosovo and Metohija.

The total turnout is around 65,000 in Serbian communities, five percent more than in the last elections, said the president of the Serbian List.

President Aleksandar Vučić congratulated the Serbian List on winning all ten mandates in the elections in Kosovo and Metohija.

“I congratulate our people. I hope so and that is an important thing, because we are facing a difficult period,” Vucic emphasized for TV Pink, commenting on the information that the Serbian List won 99.14 percent of the votes in North Mitrovica.

Selaković: Every part of the victory, happy Statehood Day

The Minister of Foreign Affairs of Serbia, Nikola Selaković, congratulated the Serbian List on winning all 10 seats.

“Every part of the great victory to the dear brothers and sisters from the Serbian List !!! Happy Statehood Day to us,” Selaković wrote on Instagram.

“The policy of Serbian harmony and unity won, because Serbs in Kosovo and Metohija recognized the seriousness of the moment and the importance of being presented in Pristina as a monolithic and unwavering political force in the upcoming period,” Petkovic said, according to a statement from the Office for Kosovo and Metohija.

Đurić: I am looking forward to the success of the brothers and sisters from the Serbian List

Serbian Ambassador to the United States and former head of the government office for Kosovo and Metohija, Marko Đurić, spoke on the occasion of the elections, emphasizing that he is looking forward to the success of the Serbian List.

“I am endlessly looking forward to the success of the sisters and brothers from the Serbian List tonight. You are the strength and pride of the entire Serbian family! We are continuing the fight,” Đurić said via Twitter.