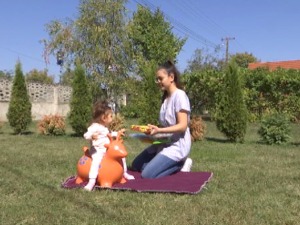 The RTS team found Minja playing with her mother and aunt in the yard, on a rocking horse. She likes to put together a wooden puzzle the most – which she couldn’t do just seven months ago.

Minja was born as a healthy girl. After three months, the young parents began to notice that she was moving her arms and legs less and less, she could not lift her head. She received much-needed therapy on January 24.

“First of all, we first noticed a change in crying, Minja started to cry louder, then she has better control of her head. She started to sit alone, with physical and occupational therapy she quickly mastered some exercises with her hands,” says the changes she noticed in Minja. mother Živka Matić.

Minja can stand with support and eat much better. No respiratory infections as before.

“We didn’t even dream that she could make so much progress in six months, but she still has work to do, to work with her, to practice, in order to make more progress,” says Minja’s mother.

“I stop by for at least five minutes just to see her. She learns something new every day – for example, she learned to put the dice together,” adds Ana.

On October 7, Minja turned two years old, in seven months of treatment she managed to almost reach her peers, these days she continues with daily exercises and she is about to go to a speech therapist.

Although, cheerful Minja still utters words and communicates, especially with her house Badža, from whom she does not separate.