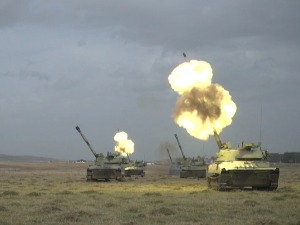 The final part of the “Lightning Strike” exercise, which began on June 15, is at Peshter, alarming 15,000 soldiers who showed why they were all trained on several training grounds. We will see the most modern weapons, aircraft available to the army.

General Simovic said that the Serbian Army is an armed force which, together with the Ministry of Internal Affairs in the Intelligence Agencies, protects all citizens regardless of their national, religious and political affiliation.

“By the decisions of the President of the Republic of Serbia, the guidelines of the Minister of Defense and the order of the Chief of the General Staff, the Army was given the task of organizing a joint tactical exercise with combat shooting,” said Simovic.

According to him, the exercise has been going on for 11 days, it was performed in Borovac near Bujanovac, Medja near Leskovac, on Rtnje, Pasuljanski livadi, Deliblatska peščara in Titel and Orašac.

“Everything is ready for the final on Peshter. Whether it rains or not, we are prepared and the president of the state, the leadership and the citizens of the unit will tomorrow show the expertise, courage and sacrifice of the Serbian soldier,” Simovic pointed out.

He added that more people and combat equipment were engaged in the exercise than in previous exercises, there will be more planes, helicopters, interesting shootings from them.

He emphasized that there will be shootings on the T72MS tank, the CH92 drone and the “Pasars” combat system on Peshter as well.

“In the offensive operation, we will have the opportunity to see the firepower of our units, the force of maneuvers, the force of the impact, because these are fast-moving units,” he said, adding that modernized equipment and strength of our army will be shown.