“And in spite of everything, music”, a live performance for Nis residents by Vladimir Vezenković for 4 many years of labor 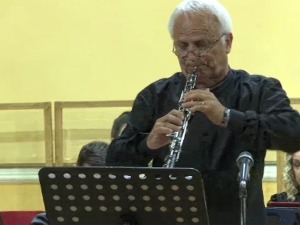 Vladimir Vezenković has been playing the oboe in the Nis Symphony Orchestra for 40 years. He was listened to by audiences in America and Europe, and he collaborated with the world’s top conductors. He called the jubilee concert in Nis “And after all, music”.

“You are doing something that you love and want all your life, that you have been educated, studied and I am learning today, that is a feeling that cannot be explained,” says Vezenković.

He has performed as a soloist more than twenty times with almost all orchestras in the former Yugoslavia.

“He is a man of extraordinary musicality, unusual, of positive creative energy, a man who captivates with everything he has done,” says conductor Milena Injac.

Stanislava Aladjozovski, the concert master, states that when you have such a colleague who has such a biography and creativity, he shows by his example every day how the younger ones should behave.

In addition to classical songs, the program also included popular compositions by Lionel Richie and Paul Enka for young people.

“Young people are eager to hear good music, there is no quality and low-quality music, only good and bad music and, of course, a performer,” adds Vezenković.

Although he has been playing for 40 years, Vezenković says that he is still learning, so he still sees his future in music.