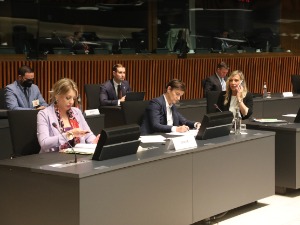 Ana Brnabić stated that she was on Intergovernmental Conference Serbia – European Union It was stated that Serbia has made progress in the past few months and that according to the new methodology, cluster 1 is open, and that during the Slovenian presidency, if the conditions are met, clusters 3 and 4 are expected to open.

Brnabic pointed out that Serbia continues with reforms with a focus on the rule of law, and stated that she hoped that two more clusters would be opened during Slovenia’s presidency by the end of this year.

“We have heard from a significant number of members that they will support us, and I guaranteed that this progress will continue, because we are doing everything we are doing for the sake of our country and the citizens of Serbia,” the Prime Minister stated.

In a statement to the press, Brnabić thanked Portugal for the support it provided to Serbia during the EU presidency, but also to the member states that pointed out that they recognize the new energy in Serbia to accept reforms and implement them especially in the field of rule of law.

“It is clear what we need to do, the positive thing is that we stated that cluster 1 is open, the most important within the new methodology, and it is clear what is expected from Serbia to open clusters 3 and 4. We are continuing with reforms,” ​​the prime minister added.

We hope for their opening during the Slovenian presidency by the end of the year, the Prime Minister stated, noting that the EU member states have heard what the conditions are for such a step.

Joksimović: The application of the new methodology has begun

The Minister for European Integration, Jadranka Joksimović, stated that Serbia has officially started applying the new methodology in the negotiation process.

“As of today, the application of the new methodology to our negotiation process has begun, a political intergovernmental conference has been held at the highest level on our part with the participation of the prime minister, which is the highest political level,” Joksimovic told reporters in Luxembourg.

“It was stated that Serbia cluster 1, the most important part of the political criteria, has already opened the basics of the rule of law with the fact that five of the five chapters have already been opened,” the minister explained.

“It is certainly an important impulse for us and we continue to work further,” concluded Joksimović.

Portuguese Minister Ana Paula Zakarias said that the progress that Serbia has made in the past months was stated and that it is important that Belgrade agrees with the new methodology.

“We welcome the opening of clusters 3 and 4 when the conditions are met,” she added.

European Commissioner for Enlargement Oliver Varhelji said that there was an essential debate on what should be done, noting that progress is visible in Serbia, which creates a new impetus for everyone.

According to the new methodology, he stated, cluster 1 is already open and we must continue to speed up the process during the Slovenian presidency, but Serbia must also do its part, said Varhelji.

“That is a clear message that the Prime Minister heard from us, and we are ready, as the European Commission, to help,” Varhelji concluded.