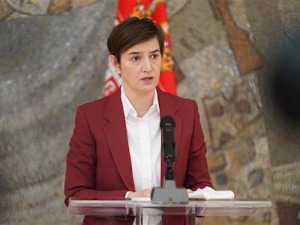 Ana Brnabic explained that the dialogue between Belgrade and Pristina is extremely difficult because people from Pristina are negotiating who are not pragmatic and are not interested in regional projects, but only to send messages that Serbia should kneel and that it is a matter of days when Serbia recognizes Kosovo’s independence. .

“They don’t want to talk about anything else. It is an extremely difficult situation, but we have to stay in dialogue,” Brnabic told TV Prva.

During the past week, it was also held last meeting in the framework of the Berlin Process which was initiated in 2014 by German Chancellor Angela Merkel, and Brnabic says that instead of the meeting being the culmination of what has been agreed and done so far, the Pristina side blocked everything so that this summit is the only one without any agreement.

He reminds that during the Berlin process, a lot of things were agreed, namely projects that do not concern politics, but what can be done in parallel to make life better for the citizens.

“We were able to celebrate this year as a year of cooperation in the region,” said the Prime Minister, recalling that regional roaming was agreed within the Berlin Process, as well as many infrastructure projects.

“There are things that need to be celebrated, but you have Pristina officials who blocked all the agreements we worked on for more than a year at the summit again,” Brnabic said.

In that sense, he states that the international community had the opportunity to be convinced on several occasions that it was impossible to talk to Albin Kurti, but also to Vjos Osmani.

As he says, at the Tirana summit, Edi Rama was convinced how impossible it is to talk to Kurti, and Sebastian Kurz had the opportunity to do so at the summit in Vienna, while during the continuation of the dialogue in Brussels, Josep Borelj and Miroslav Lajcak could see that.

“I am not overly optimistic because Kosovo is their child and it is difficult for them to turn their heads, but they understand how difficult it is and how constructive Belgrade is,” the prime minister said.

“It scares me, but the clearer it is to international factors, the safer Serbs are,” said the Prime Minister, adding that President Aleksandar Vučić informed those who should know – NATO, KFOR, the international community, the Americans about the three red lines that Serbia will not allow them to cross.

“If we have elections next year, I expect that pensions will grow by at least five percent this year. We will try to have more, and we will also try to go with one-time help to pensioners,” Brnabić said.

According to her, an increase in salaries above 600 euros will enable GDP growth, which she expects to be 7% this year.

Brnabić points out that Serbia has already surpassed all the countries of the Western Balkans in terms of salaries, and she expects to overtake Bulgaria by January 1.

Commenting on the list of the safest countries in the world in 2021, on which Serbia climbed from 59th to 34th place, the Prime Minister says that it was influenced by the health situation related to the corona virus, the ability to carry out immunization, but also economic growth.

Emphasizing that this is a great thing for Serbia, Brnabić says that, in addition to Estonia, we are by far the best ranked country in Southeast Europe and that we are ranked better than half of the EU members.

“It is a great thing, it is also economic security, the security of citizens, and this is another objective indicator that shows how much Serbia is progressing in each sector,” the Prime Minister said.

Speaking about the economic growth of our country, Brnabić states that this week marked a great investment for the future, ie that the first generation of elementary school students was made, for whom informatics was a compulsory subject.

“It is a huge investment for the future, they are ahead of their peers from developed European countries such as Switzerland, Germany, where informatics is not a compulsory subject,” said the Prime Minister.

She also mentioned that an ambience was created for these students to continue their education through high schools, reminding them that specialized and specialized IT departments have been formed, as well as art departments that should develop creativity.

“Serbia does not interfere in the internal affairs of Montenegro”

Asked to comment on the accusations that Serbia interferes in the internal affairs of Montenegro, Prime Minister Ana Brnabic said that Serbia does not interfere in the internal affairs of Montenegro and pointed out that, as far as that country is concerned, she is only interested in regional cooperation and the position of Serbs.

Brnabić on TV Prva, and explaining her statement that the message of Dritan Abazović, who is not satisfied with the statements from Belgrade, first made her laugh, then saddened her, she said that statements like his are such that there is nothing to say about them, especially when taken in considering what Montenegro has done against the interests of Serbia.

In that sense, the Prime Minister reminded that Podgorica adopted the resolution on Srebrenica 26 years after the crime, as well as that they donated vaccines to the so-called Kosovo Army.

“It is not a problem to donate to Pristina, and we donated PR tests when no one in the international community remembered Pristina, but the problem is to donate 400 vaccines to the so-called Kosovo Army because it is just a slap in the face to Serbia,” Brnabic said.

Brnabić states that the ambassador of Serbia was expelled from Montenegro because of something he said, which is taught in textbooks, and that the decision has not been withdrawn yet, and that every year Montenegrin officials celebrate “Storm” together with Croatia.

“You have recognized the independence of the autonomous province of Serbia and with all that you have the cheek to say that you do not like some statements of our officials. First, we are a sovereign state, we can say what we want, and second when we interfered in the internal affairs of Montenegro “, the Prime Minister asked.

She told Montenegrin officials that if they think that with the fall in GDP, they have no problem with work but dealing with Serbia, she has another job to do in the interest of the citizens of Serbia.

“Regarding Montenegro, I am interested in regional cooperation and the position of Serbs in Montenegro,” said the Prime Minister.

As she states, after everything they did, she first thought that Abazović wanted to find himself, to lower tensions, but then she realized that he was serious and then she just wanted to cry.

“But it is also healthier to laugh for regional cooperation,” she said.

It is revealed why Capital-T’s photo with Nevina Shtylla came, what was hidden behind it?