Djokovic loses 2-Zero in units within the US Open ultimate 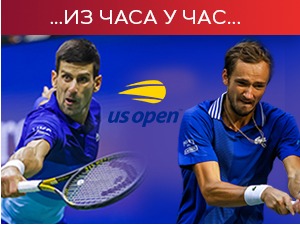 Djokovic loses service at the start of the third set. Medvedev has a huge result and psychological advantage.

Medvedev maintains the advantage of the break and puts pressure on Djokovic, who serves for survival in the second set.

The Russian tennis player first makes a break in the second set, then confirms it, and leads with 4: 2.

No break at the start of the second set. Djokovic had three break points, but Medvedev managed to turn the game around with great serves and equalize at 1: 1.

After 37 minutes of tennis, Medvedev won the first set with 6: 4 and leads in the final of the US Open.

The Russian tennis player maintains the advantage of the break, so Novak Djokovic will serve for the extension of the first set.

Medvedev had two break points in the third game of the first set, but Djokovic turned it around and won the first game in this final.

Russian tennis player’s break at the start of the match. Medvedev then confirmed the break and leads 2-0 in the first set.

The finals have begun

The match at the “Arthur Ash” stadium has started, the first on the serve is Novak Djokovic …

Everything is ready to start

The tennis players are making the last preparations before the match, Novak will be the first on the serve.

The ninth duel between Djokovic and Medvedev

The Serbian and Russian tennis players met nine times on the ATP tour, and Novak leads in the mutual score with 5-3.

The Serbian tennis player has not lost to Medvedev at the Grand Slams.

Novak a step away from the dream and history of tennis

The victory of the Serbian tennis player in the final of the US Open would bring a “calendar slam”, something that only Rod Laver managed to do, back in 1969.

Novak intends to crown an incredible series of 27 victories at the Grand Slam tournaments this season with a new triumph, which few have succeeded in the modern age of tennis.

She ‘copied’ her hair style, Loredana replies with Arta Nitaj