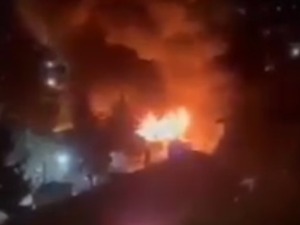 The fire, which broke out in the prefabricated covid center in Tetovo, killed at least 10 people, Venko Filipče announced on Twitter, and noted that the number of victims could increase.

The Minister also said that doctors are fighting for the lives of the injured, who were transferred to the hospital in Skopje.

Between 20 and 26 patients were accommodated in the covid center that caught fire.

More than 30 firefighters intervened with seven vehicles. The fire was extinguished.

Tetovo Mayor Teuta Arifi says she was informed that the fire broke out very quickly and spread quickly.

“I am sorry that these are sick people who were here for treatment. Information from the police and the hospital is still expected,” said the mayor of Tetovo.

Osmani consoles the families of those killed in Peja, invites law enforcement agencies to solve the murder – Latest News