For us, Kosovo just isn’t solely a geopolitical subject, but in addition a query of id 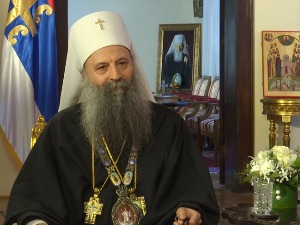 His Holiness Patriarch Porphyry of Serbia said that, after the enthronement, the first feeling and the dominant feeling that held him for a few days and still has not stopped is the feeling of fear of great challenges, but also the burden that, in principle, carries any patriarch .

“At the same time, I must say, remembering the words of the Apostle Paul, who, when he presents himself to those to whom he addresses through his letters to teach them, speaks of himself, a servant of God and an apostle of Christ, of hope in eternal life. “Because, on the one hand, it is the love of the new that has greeted me in this new position that gives me strength and courage. On the other hand, these words of the Apostle Paul clearly speak about who should be and what a patriarch should be, but also what is a church in principle “, stated the Serbian Patriarch Porphyry in an exclusive conversation in the show Questionnaire.

He stated that it will be his job to present on behalf of everyone what is good and what is good for our people, our church and our state, but also for all members of our church who are all over the planet.

“The referendum in Kosovo was held in 1389 on Vidovdan”

Speaking about Kosovo and Metohija, the Patriarch of Porphyry stated that at this moment, physically, our state is not present there in the full sense of the word, but that “Kosovo is essentially a part of Serbia.”

“The referendum in Kosovo was held in 1389 on Vidovdan and Kosovo is simply for us, not only the cradle of our people, it is also the ark full of the relics of the saints. Kosovo is not just a geopolitical issue for us, but it is really a topic of our identity for us. I am absolutely sure that, regardless of the real-political circumstances that are not in the least favorable to our people, our state is doing everything by diplomatic and strategic methods in order, above all, to preserve peace and to do as much as possible for the good of our people. “, the Serbian patriarch pointed out.

He added that he thinks that no one in a patriotic mood can think that Kosovo is not part of Serbia.

“For six centuries, Kosovo has been a prayer story, a prayer topic for us Serbs, and after six centuries we have remained in Kosovo and Kosovo has remained within Serbia. Therefore, to talk about living together yes, but everything beyond that and beyond, as far as the church is concerned , it would be a renunciation of our being, “the Patriarch of Porphyry emphasized.

He reminded that he became a monk in Kosovo, in Decani.

“My first bishop was the blessed Patriarch Paul, and he said that prayer is the strongest weapon against evil, and he added that if God is with us, then no one can do anything to us. I believe that God is with us, because when it comes to about Kosovo, the truth is on our side completely “, stated the patriarch.

“We have to nurture memory, but to fight resentment, we need to look to the future.”

Since 2014, the Patriarch of Porphyry has been the Metropolitan of Zagreb and Ljubljana. He stated that he was sorry that he would physically separate from many people he knew in Croatia, but also from the faithful Orthodox people with whom, as he says, he had just started to form a church community.

Speaking about Jasenovac and other execution sites in Croatia, the Serbian patriarch stated that many of our compatriots suffered because they are of the Orthodox faith.

“We must nurture memory and remember, but at the same time as Christians we must fight resentment, because we must look to the future. We must not allow in any way in that culture of remembrance to be trapped by any kind of vengeance and hatred because we will to capture yourself again. That spiral of evil that has begun will never end. “

He said that everything must be discussed and that this is the only way to go further.

He stated that the Pope’s visit to Serbia depends on many factors.

“I will not think about especially important and epochal events related to the church alone, and everything must be the product of the conciliar reflection and the prayerful reflection and conversation of our Assembly of the entire church,” the patriarch pointed out.

He added that so far no initiative has been taken by the Vatican, and vice versa.

Speaking about the issue of autocephaly of the Orthodox Church in Macedonia, Patriarch Porphyry stated that he would not have more understanding in relation to his predecessors.

“Each of us leaves a special mark and, of course, I essentially care about overcoming the schism with the Macedonian church. At this moment, after the Nis agreement, our church found a solution to appoint and elect Archbishop Jovan as the Ohrid archbishop, so that all Orthodox believers have the possibility of participating in liturgical life, but that topic remains open and I believe that our Council will be ready to reach a solution that is in line with the canons without any political influence and pressure, “the patriarch pointed out.

“I knew and know a large number of politicians.”

The Patriarch of Porphyry said that he knew and still knows a large number of politicians outside Serbia and that he had no problems with any of them.

“Some will say, and there are such voices, he is someone who changes parties, as if I were a politician. For me, politics is an environment in which the church between Scylla and Charybdis, identification with politics and conflict on the other side with politics, should pass. “It is about Christ. Christ is our measure. We preach eternal life,” said the patriarch.

He reminded of the words of Saint Seraphim of Sarov, who said: “Gain peace in yourself and many will find peace in you.”

“If a politician, a doctor, a journalist, acquires the peace of Christ in himself, the work he will do will be illuminated and imbued with his peace,” the Serbian patriarch pointed out.

He stated that the church cannot be identified with any policy, but to testify to the essential conciliarity in Christ.

He pointed out that he had an equally open mood with all politicians in Croatia, and as he stated, “I guess God wanted him not to have a problem with any of them.”

“For everything that was needed for the church, for my people, I managed to realize in two words. In Serbia, I don’t have to list names. Nomina sunt odiosa, as the Latins say. I knew many politicians, and those who led the country and I know and I had close meetings with them, conversations, but I never abused my acquaintance, even in the sense of the monastery where I stayed, although my monastery, while living in Kovilj, was the first to get its land in the process of restitution, “said the patriarch. Porphyria.

He stated that many politicians came to the Kovilj monastery, where he stayed for 30 years.

“I can mention that Djindjic came. I can mention him, because, God forgive his soul, he went unhappily, to God for the truth, but few people know that. Even those who are from his party and who inherited it they don’t know, and I knew them too and I never talked about it, “the patriarch said.

“We will never betray the Orthodox Church and our people”

He said some acquaintances from the world of politics told him that he “betrayed these, and now he has sided with these”.

“We will never allow, because there are such rumors, that we will in any way betray the tradition of the church and the order of the church. If you want me to use that word, we will never betray the Orthodox Church and we will never betray our people. I am in Croatia like this I am ready, with the Holy Spirit, that is the place where I lived, on my knees to go to Jelacic Square knowing in the depths of my soul what I am doing, if it would result in good for my people in the true sense of the word, whatever anyone said “, the patriarch emphasized.

He said that he believes that there are many wolves in lambskin who would like to bring discord into the church afterwards, but that he is completely sure that this cannot happen because the heart of the church is a living God called Jesus Christ.

“I am sure that this will result in, at the very least, better acquaintance, and then better understanding, and when there is elementary understanding among people, even on the political scene, I believe that calmer living conditions can occur.” said the patriarch.

Speaking about same-sex unions as a request coming from Brussels, Patriarch Porphyry said that marriage is a term from the Old Testament and that Brussels exerts not only political, but also social pressure on the countries that should become members.

“In that sense, when it comes to a possible law, of course we cannot be for same-sex communities to be called by the same name as the communities of men and women, at least,” the Serbian patriarch pointed out.

Speaking about the epidemic situation, the patriarch of Porphyry stated that we are obliged to respect doctors and listen to all epidemiological measures, but also that sociologists and psychologists and priests must be included in thinking about measures.

“I deeply believe that it is possible to organize worship services and all religious rites in these conditions, such as today, in such a way that we respect epidemiological measures and thus protect the other from ourselves,” the patriarch pointed out.

He was enjoying himself in the bathtub on the balcony, how did Genta escape without falling?

Biden: At the end of May the US will have vaccines for all adults – Latest News