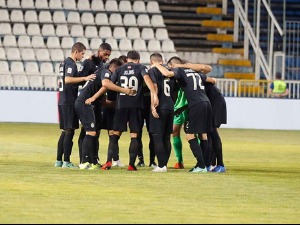 The football players of Novi Pazar and Partizan spent significantly more than the planned 90 minutes on the field in the match of the fourth round of the domestic championship.

The reason for that is certainly the interruption of the match due to the improper chanting of the fans of both teams, which lasted for more than 35 minutes.

The host entered the match solidly, threatened first and hinted that he would not be afraid in the moments when he has the ball in his feet, but look for a way to endanger the opponent’s goal.

As time went on, Partizan gained control in the middle of the field and slowly came to its more recognizable game.

Pantic had the most concrete chances for the guests on a couple of occasions, but he did not manage to change the result.

When it was thought that he would go to the break without scoring a goal, Natho brought Partizan the lead in a masterful way.

The Israeli first created a position for himself to shoot from a distance, and then from 20-25 meters, with his left foot, he sent the ball into the net with a very precise and strong shot.

In the second part of the game, Partizan completely broke any resistance of the hosts.

At the very start of the second half, in the 49th minute, Urošević doubled the advantage of his team.

A good attack by Partizan and a deferred ball on the left side, from where the black-and-white defender “knocks” into the opponent’s net.

In the 60th minute, Partizan reached a convincing 3-0. A catastrophic mistake was made by the home goalkeeper Ostojić, who first caught the ball sent to Ricardo, and then dropped it straight at the feet of the attacker from Cape Verde, and he sent it into the undefended net without any major difficulties.

After that goal, the referee had to stop the match due to the inappropriate behavior of the fans in the stands.

The match was interrupted for about 35 minutes, because the home players, who left the field, did not want to return to it, until the visiting fans left the stadium.

After the intervention of the members of the police, the visiting fans left the stadium, and the match continued.

By the end of the match, two more goals were scored, one on each side.

First, Suma used Pantić’s timely pass in the 75th minute, “broke” the Novi Pazar defender and shook the net for 4: 0, and in the last moments of the match, Mijailović set the final 4: 1 with his head.

Arbnora Ademaj star on the poster of the Turkish series