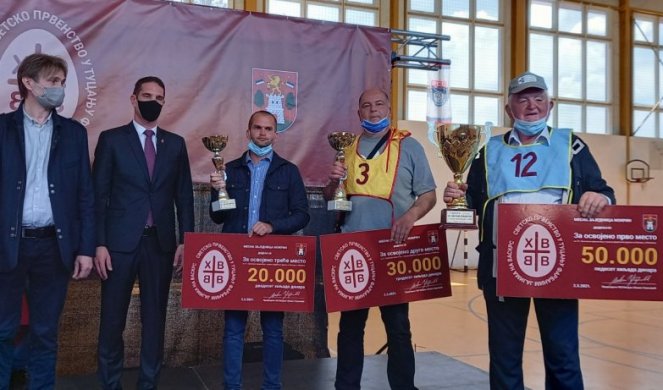 On the podium, with the title of proud owner of the hardest eggs in the world,
this year, a grandfather and grandson from Mokrin climbed. Excited and flushed
seemingly collected, the new, otherwise four-time champion of “Tucanijade” in the category
senior, Sava Terzic, proudly raised the winning trophy in the sports hall, which
pushed Dušan Prodanov, the champion of 2019, from the throne.

Grandpa Sava did not hide his happiness because of the double victory with his grandson.

– It is an incredible feeling that my grandson Ivan won today, I have a lot
heart.I won previous titles in ’96, ’97, 2017 and today. We’ve been looking all year
favorites for the championship. We have chickens and these winning eggs are from ours
yards. It is important that the hens are of domestic breed and that they lay strong eggs – says the proud
winner, Sava Terzic.

Nothing less was expected from five-year-old Ivan Terzić, whose grandfather is with him
mother’s side, Živica Blažić, also a four-time champion of “Tucanijada”.
– My dad and grandfather chose my winning egg. We kept him in the back room in
shade – said John who followed in the footsteps of the elders.

This year, about 90 competitors applied for Tucanijada, of which 60 are in
senior category. The famous Mokrin festival was not held last year,
due to the corona epidemic.
– Only competitors and judges are present in the sports hall, everything else is the same. It’s the crown
took a “tribute”, so a small number of competitors applied. They mostly came from
Mokrina, Kikinda, Novi Sad, three from Republika Srpska who are already with us
previous 20 years, but also from Sweden – says Zivica Terzic, president of the competition
commission and the father of champion Ivan.

The inviolable rule of the Mokrin competition requires cutting the winner
eggs with a machete, purely to prove that it is natural, chicken and that it is nothing
reinforced. Half is eaten by the owner, and the other half by the president of the jury.

That this is a serious and fair competition, without lies and deception, is shown by the fact
that the selected favorites before the championship are strictly kept under lock and key, in special
made safe. The people of Mokrin are so devoted to the so-called Tucanijada that they are
even founded the Academy and the Institute for the Selection of Hard Eggs.

Apart from “Tucanijada”, Mokrin is also known for “Gusanijada”. Both unofficial world
The championship was designed by the village doctor Dr. Bogdan Sedjakov.

Occasions of Could third