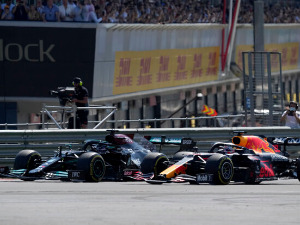 The driver of the Red Bull was taken to the hospital after his car “knocked” into the protective wall with its force after the contact with Hamilton on Sunday, and the impact was 51G, the BBC reported.

“I am very disappointed that I finished the race like this. Watching the celebration while I was in the hospital, I saw disrespect and unsportsmanlike behavior, but let’s move on,” Ferstappen said.

Ferstappen was transferred to the hospital as a precaution, but he wrote on Twitter that he was “ok”.

The race was interrupted for ten minutes, during which time Hamilton managed to fix his car and continue the race.

The Briton received a penalty of 10 seconds behind after the incident, after which he fell to fourth place, but returned to the race and overtook Ferrari driver Charles Leclerc, winning the race for the fourth time this year.

“The punishment he received means nothing to us and does not give a sense of justice because of the dangerous move that Luis made during the race,” Ferstappen said, after Hamilton’s wheel hit the Dutchman’s car.

Hamilton said that he was quite far as he passed by him, but he added that he did not see the rival making a maneuver, “but then he entered the curve and there was a collision”.

“Of course, I would never want to win a race this way, but things like this happen. I just hope Max is okay. And I’m looking forward to the next races,” Hamilton said.

Floods in Germany, Albanians come to the aid of the Germans: They helped us in the war – Latest News