HIS HEART BEGUN TO GRANT, HIS KIDNEYS WERE DAMAGED! Medical doctors managed to save lots of a affected person with a extreme medical image of the crown! / VIDEO /

He is one of the few who survived two and a half months on a respirator, despite the fact that the covid attacked his vital organs. The success of the team of doctors from the covid 2 unit of the University Clinical Center in Kragujevac is so great that they managed to save this difficult patient even if his kidneys failed completely, so in addition to the breathing machine, they had to connect him to a dialysis machine.

Dr. Katarina Pavlović, an anesthesiologist, who is among many who took care of Đurović, says that on February 4, he came with a severe covid 19 infection, and that he had almost total lung failure.

Dragan is a MEDICAL PHENOMENON! He was on a respirator for 75 days, from 120 kg he dropped to only 70! Now he is learning to walk again! THIS IS THE MOST TERRIBLE STORY OF THE EPIDEMIC!

– After a short period of supportive ventilation, he had to be connected to a respirator after only three days. Thus begins our long struggle for his life. Heart failure, kidney damage followed and he was dialyzed for more than a month. After a long fight, two weeks ago, we managed to separate him from the respirator. He is now training intensively, and he is getting stronger and better every day, says Dr. Pavlović.

Dragan Đurović slept all day today, because he had to do so due to the change of the silicone cannula through which he receives air and food. Otherwise, when he is awake, he is in a good mood, and gradually exercises to sit down. His muscles atrophied after a long unconscious state, and during his stay in the hospital, he lost as much as 50 kilograms. He reduced his weight from 120 to 70. According to him, “he did not believe that the virus existed until he became ill”, and he used every opportunity to tell the citizens to be careful and get vaccinated … 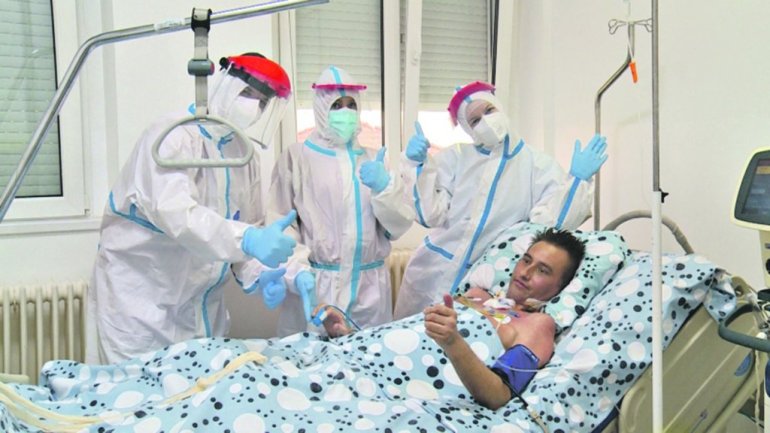 Since the beginning of the pandemic, more than 500 of the most severe patients have been treated in this intensive care, of which every third survived. According to doctors, that is about six percent more than the world average. Based on the experiences they have, they say they expect, and when the pandemic begins to subside, to treat old covid patients, because the disease has left severe consequences for many, especially on the lungs and heart.