“Huge John” at public sale after 66 million years, is value about $ 1.5 million 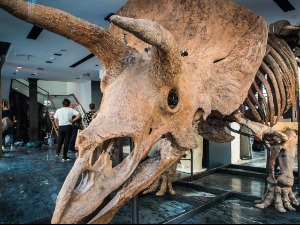 The fossil, nicknamed “Big John”, has a skull 2.62 meters long and two meters wide. Its horns are 1.1 meters long and over 30 centimeters wide, making it the largest sample of triceratops ever discovered, auctioneers from Drew said.

Big John was a herbivore, reaching a weight of 5,500 kilograms and a height of nine meters.

Triceratops roamed the Earth, in the Late Cretaceous period, about 67 million years ago.
According to the auctioneers, it is believed that this dinosaur lived on the island continent of Laramid, which stretched from today’s Alaska to Mexico.

The laramid disappeared in the ancient Hell Creek Plain Formation in South Dakota, and it was there that geologist Walter Stein Bill discovered a dinosaur fossil in the spring of 2014. The geologist was doing research for his company.

The excavation of the found fossil lasted for about a year, and then the body of “Big John” was sold to an Italian trading company in Trieste, which is engaged in restoration.

This workshop will sell triceratops at auction.