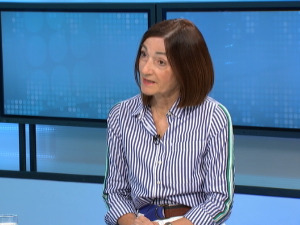 Ljiljana Smajlović, as a guest in the RTS morning news, stated that it is not at all a coincidence that two important events – verdict against Ratko Mladic i UN Security Council session on The Hague take place on the same day.

“Everyone has already said that it is not accidental and it really cannot be accidental. The court in The Hague is the UN court, that is, the Security Council formed it. So, this is a way to make the maximum effect. To have that in one day, perhaps, in a way, the most important verdict, because Srebrenica is the most important case that was resolved in The Hague, “Smajlovic explains.

According to the guest of the morning program, my impression is that the first-instance verdict against Ratko Mladic will be confirmed today and that he will be sentenced to life imprisonment.

“I agree with the wording that this is a difficult day for Serbia. But I think we must first say that a verdict will be handed down for a terrible crime, regardless of whether we agree that this crime should be qualified as genocide or not.” as serious as Jasenovac or the Holocaust, it should be said that today is the day when we should pay tribute to the victims of Srebrenica, when we should sympathize with the pain of their families and when we must think about it and respect the pain of those families who lost so many people. For me, Ratko Mladic is someone who did commit a war crime. I consider him a war criminal, “Smajlovic said, adding:

“I did not notice that anyone serious claims, I am talking now about legal and Western experts, that the verdict will change in the part that Bosniaks and the government in Sarajevo and prosecutor Serge Brammertz want the most, and that is to say that it was not just genocide in Srebrenica, but that he was also in these six municipalities “.

That court is neither a sanctuary nor a purgatory, says Smajlović, “his verdicts are not the Holy Scriptures, and when Serbs are objected to not accepting that a crime of genocide was committed, and I have now noticed that in the Western media, the fact that none of the Serbian statesmen denies the crime in Srebrenica, they only deny or challenge the legal qualification of genocide and that is an important difference. “