Is Serbia prepared for the Regulation on Similar-Intercourse Communities? 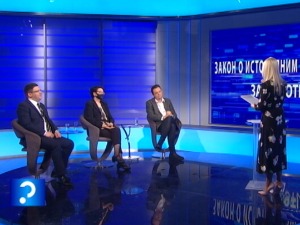 Serbia would be the 48th country in the world to regulate rights and obligations in the same-sex community.

Visiting the show “Questionnaire” on RTS, the Minister of Human and Minority Rights and Social Dialogue Gordana Comic says that the Law on Same-Sex Communities represents respect for human rights and the Constitution of the Republic of Serbia. “People in the same-sex community should have the right to regulate how they will inherit from each other and the status of children from previous relationships.

As she emphasized, the law must not make people unhappy.

Goran Miletić from the Coalition against Discrimination emphasizes that the problems faced by people of the same sex living in the community – inheritance, common property, visits to the hospital and prison – must not be ignored.

“The law will regulate the issues of joint property, inheritance, decisions on treatment and visits to hospitals and prisons, which can now only be done by family members, care for children who were obtained in a previous relationship,” Miletic explains.

Aleksandar Đurđev, the president of the Serbian League, claims that ninety percent of the citizens are against such legal solutions, adding that the issue should still be publicly discussed.

“I hope that the law will not be adopted, which has already been announced by some deputies of the ruling coalition. More time is needed for discussion,” said Djurdjev and called for a referendum on the issue of same-sex unions, citing the example of Ireland and Slovenia.

Minister Čomić replied to Đurđeva that according to the Constitution of Serbia, a referendum cannot be called on the areas that regulate human rights.

Miletić, referring to the public opinion poll, points out that the LGBT community is aware of the attitude of the citizens, stating that only 23% are for gay marriages, but that more than 80% are for regulating rights within the same-sex community. That law removes the legal gap, Miletic added.

According to Djurdjev, it is very indicative that the Ministry of the Family and the Serbian Orthodox Church, as well as other religious communities in Serbia, are not included in the process. The minority cannot dictate to the majority how it will pose itself on that issue, says Djudjev, referring to the alleged position of Patriarch Porphyry, who declared himself against same-sex communities.

Gordana Čomić said that a public debate on the Bill will be held for 20 days, and that document will also be found on the website of the relevant ministry.

Djurdjev believes that the relationship in a same-sex community can be regulated by the existing laws on inheritance and gift. “This is against the tradition and interests of the people,” says Djurdjev, adding that the vast majority of citizens do not know the provisions of the bill.

Miletic: The democracy of society is measured by the attitude towards minorities

Goran Miletić points out that the democracy of a society is shown according to how much rights are given to minorities, no matter how many they were. The LGBT community was the only one in Serbia whose members were threatened with liquidation on the street, Miletic emphasizes.

Comic says that it is about the law on people, behind which are university professors, the LGBT community, that is, people who live in same-sex communities.

Djurdjev reiterates that additional time is needed to discuss this issue. I call on the deputies to vote against that law. It is necessary to go to the referendum and then it would be seen that 90 citizens of Serbia are against, claims Djurdjev.

Comic emphasizes that the most important thing is that when the legal proposal enters the parliamentary procedure, political will is built and that the complete argumentation of each MP is heard at the session.

Foods Not to Eat in the Evening – Latest News