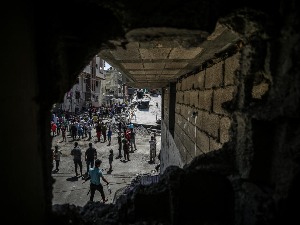 After 11 days of continuous rocketing of the Gaza Strip and Hamas attacks on Israel, the Israeli Security Cabinet made a decision on a ceasefire.

The cabinet of Prime Minister Benjamin Netanyahu has confirmed that The security cabinet unanimously approved a ceasefire in Gaza.

The statement said the ministers agreed to “accept Egypt’s initiative for a mutual ceasefire without any conditions, and the time when it will take effect will be determined later.”

Israeli defense officials informed the ministers at the meeting that “Hamas has suffered serious blows.”

A Hamas official confirmed to Reuters that a “mutual and simultaneous” ceasefire with Israel had been reached, which would end the 11-day conflict in Gaza.

According to the media, the ceasefire is expected to start at 2 am.

Palestinian sources state that Israeli forces continue to shoot at targets in the Gaza Strip, ahead of the start of the ceasefire, while Israel has appealed to citizens living in border settlements to stay within reach of the shelter.

Reactions from the world to the armistice

U.S. Secretary of State Anthony Blinken says he is ready to travel to the Middle East.

“I am ready at any time to go to Israel, to the Middle East, if that would help the ceasefire and help improve the lives of both Israelis and Palestinians,” the US Secretary of State said.

Egyptian efforts to achieve a ceasefire between Israelis and Palestinians have been successful, Egyptian state television reported.

Two Egyptian delegations will be sent to monitor the ceasefire agreement, which aims to end the 11-day conflict, diplomatic sources told the Egyptian.

Delegations will be sent to Tel Aviv and the Palestinian territories to “monitor the implementation of the ceasefire and the procedures for maintaining stable conditions on a permanent basis.”

The decision to end the conflict was preceded by heated debate at the UN Assembly session In New York.