Joc and Partizan 30 years earlier – the highest of Europe, a triple crown and one much less profitable season 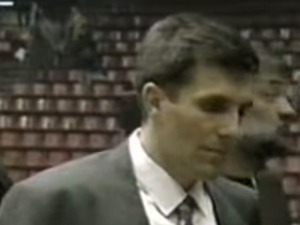 Zeljko Obradovic is that summer 1991 was in Poreč for the national team preparations before the European Championship in Rome, while a new Partizan coach was wanted in Belgrade. Former – Dusko Vujosevic resigned after a smooth defeat by Jugoplastika in the final of the Yugoslav championship and ended up in the Red Star.

Not seeing a better replacement for Vujosevic, Dragan Kicanovic suggested that the current playmaker Zeljko Obradovic be appointed the first coach. President Radojica Nikčević, Dragan Todorić and Đordje Čolović were astonished by the proposal, but accepted it visionarily.

The decision with lasting consequences for European basketball was made suddenly and unexpectedly, but not without basis and idea. Zeljko also acted as a coach on the field, he understood the game, he had a notebook in which he wrote down the actions from training and it was known about his desire to start a coaching career after playing.

At the airport in Belgrade, Obradović announced to Duda Ivković that he was retiring from the national team because he became the coach of Partizan. As a counterweight to Obradović’s inexperience, Professor Aca Nikolić was appointed as an expert associate. Nikolic had a similar role in previous seasons with Bozidar Maljkovic in Split’s Jugoplastica. Milenko Savović was appointed sports director the same year.

The first season of the European League

That is how Partizan, defeated by Jugoplastika in last year’s final series of the last Yugoslav Championship, in which teams from Croatia also played, deserved a place in the second qualifying round. In two games, the Hungarian Szolnok was convincingly defeated with a total score of 181: 137.

Due to the increased number of participants, the teams were divided into two groups of eight teams after the qualifications, unlike in previous seasons. Partizan reached Group B with Juventud, Estudiantes, Philips from Milan, Bayer 04, Aris, Dutch Commodore and Belgian Maes Pils.

A young team without strangers

The average age of Partizan players in the Istanbul season was 21.7 years. There were no foreigners in the team. Before the start of the season, Zarko Paspalj, Miroslav Pecarski, Marko Ivanovic, Oliver Popovic and Zeljko Obradovic left the team and got a new role.

Vlada Dragutinović and Slaviša Koprivica returned from IMT. Mladjan Silobad came from Zvezda, and Zeljko Rebraca from Novi Sad’s NAP. The most experienced player of the new team was Dragan Šarić, a newcomer from Vojvodina. Stevanović, Nakić and Lončar stayed in the club with the back tandem Danilović-Đorđević.

Sasha and Sasha did not talk to each other during most of the championship season. The reason for the interruption of communication was a discussion at a training, and the real cause, as they later concluded, was too much ego and vanity.

It happened that they sat together at the table in the cafe with their girlfriends, good friends with each other, silently listening to them talk.

No one on the field could notice their disagreement. They were a tandem like Kića and Praja, the leaders and the best scorers of the team. Djordjevic will also hit the famous triple in the final, and Danilovic will be named the most useful player in the final four.

FIBA has decided that due to the war that has flared up in Croatia, teams from Yugoslavia must play abroad as hosts. After the preparations in Budva and Kopaonik, where good results were achieved in the preparatory matches, it was decided that Partizan, as the host of the European League match, will play in Fuenlabrada, a suburb of Madrid.

While Europe was appalled by the events in Yugoslavia, Partizan was welcomed in Fuenlabrada as if it had been founded there. People in Fuenlabrada could not resist Partizan’s youth, energy, beautiful basketball, but also exemplary behavior and treatment of the locals.

Fuenlabrada was infected with basketball and black and white colors. From the first to the last game of the group stage, Partizan was accompanied by loud support from the full hall. “Serbian brigades from Fuenlabrada”, it was written on a large banner under the arches of the hall, and the famous flag “Partizan de Fuenlabrada” was a warning to everyone that Partizan has a home and is not alone.

Unusual events in the suburbs of Madrid stopped being sympathetic to the Spanish public when the fans from Fuenlabrada cheered for Partizan against the Spanish teams Juventud and Estudiantes.

Nine wins and four defeats in the group

The fact that all four participants in the later final four were from Group B testifies to the quality of Partizan’s opponents in the group.

Partizan won the fourth place with nine victories and four defeats, the last one that led to the quarterfinals.

An important victory for the pass was achieved in Fuenlabrada against Juventud when Zoran Stevanović hit two free throws before the end of the match, and Slaviša Koprivica saved the victory by blocking on the other side of the field – 76:75.

From the fourth place in the group, Partizan advanced to the quarter finals, where Knorr from Bologna, the first-placed player from Group A, was waiting for him in the series for two won matches. Knor had the advantage of the home Teran, and the propositions were such that in the first game, Partizan was the host.

FIBA allowed the match to be played in Belgrade. More than 4,500 spectators did not come to “Pionir”, and the enthusiasm of Belgrade fans was not at the level from Fuenlabrada. Black and whites won with the result 78:65.

The first game in Bologna was close to the hosts – 61:60. The exciting master ended with the victory of Partizan 69:65. I remember the dunking of Zoran Stevanović, who did not survive the board.

There was a break of almost half an hour, which cut off the good start of the Italians. Shooting them with various objects, the disappointed Bologna audience sent the black and whites to the final four.

Partizan left for Istanbul in a good mood – the plane did not even take off from Surčin, and it became known that assistant coach Velimir Gašić had a son.

Phillips from Milan and the terrible Doukins in the “Abdi Ipekci” hall did not prevent Partizan from qualifying for the finals. Juventud convincingly defeated Estudiantes in the Spanish clash and scheduled the third match with Partizan that season.

In the middle of the second part of the game, Juventud led with a maximum of 55:45, but by the end of the game, the advantage was slowly melting. The last minute of the game was played, and the scoreboard read 68:68. Villacampa missed a free throw (“shot one for one”), but Morales caught the ball and forced Danilović’s fifth foul.

Morales also missed a free throw, but Thompson jumped the ball to Djofresa in the jump. Đofresa spent 20 seconds, then started to break through, went around Đorđević and hit over Stevanović.

The ball went through the hoop and fell right into the hands of Morales, who naively, not giving his teammates time to stand in defense, handed it to Koprivica. Koprivica takes the ball to Djordjevic, and he runs next to the right car, stops in front of the line for three points, jumps on the shot with his feet turned almost towards the side car and, rotating his body in the air, shoots the ball towards the basket …

“Three points, three points! Time’s up! Don’t be angry that I fell silent for a moment. 71:70! I haven’t experienced this in my career.”

And domestic trophies in number

The campaign for the European trophy and the home field at the two ends of Europe did not prevent Obradović’s team from winning two domestic trophies without much trouble.

The league part of the Yugoslav Championship, in which teams from Bosnia and Herzegovina still played, but there were no Croatian ones, Partizan finished with 20 victories and only two defeats – from Bosnia and Rabotnicki, both with half a basket behind.

The balance was not spoiled in the playoffs either, since in two games of the semifinals, Sloboda from Tuzla was convincingly defeated, and then in the finals, Crvena zvezda with a total of 51 points difference in three games in Belgrade.

Partizan also won the third trophy – the Yugoslav Cup at the final tournament in Nis. In the semifinals, Rabotnicki from Skopje was defeated, and in the finals, quite convincingly, Sarajevo’s Bosnia was defeated with the result 105: 79.

No right to defend the title

Zeljko Obradovic remained the coach of Partizan next season – 1992/93, and it will turn out to be the only one who tied two seasons on the black-and-white bench in that decade. However, due to the difficult circumstances of the war, the departure of the best players, but also the lack of luck in some games, Obradović’s second season at Partizan ended without winning trophies.

Obradović has said several times that he would probably never become what he is today, if only the first season at Partizan looked like the second.

After winning the Euroleague in Istanbul, as it usually happens, there are no sneakers left from the leader of the champion team in Partizan.

Due to the imposed sanctions on Yugoslavia, Partizan lost the right to defend the won Euroleague and thus became and remained the only team in history that did not get the opportunity to tie two European trophies, although it deserved that right by winning the domestic championship.

Whoever fights for three, suffers from three

That luck turned its back on Partizan was seen in the championship matches with the eternal rival – from the weapons that the black and whites heroically tackled in the final of Istanbul last season, they suffered bitterly in two league matches with the Red Star.

Nikola Lončar’s missed triple for equalization in the first and Aleksandar Trifunović hit from the half of the field for the victory in the second, announced the troubles that Partizan will have with Zvezda’s generation Obradović, Ilić, Jovanović, Trifunović …

Through Spartak Subotica in the semifinals, Partizan advanced to the finals, where Zvezda was waiting again. While Nikola Lončar imposed himself as the new leader of the team, twice the black and whites equalized in the final series, but the red and whites celebrated in the championship and won the title after 20 years of waiting.

Previously, Partizan was left without the trophy of the winner of the Yugoslav Cup, as it lost in the final in Kosovska Mitrovica to OKK Belgrade 104: 91, led by Zoran Radović, then a veteran who was bringing his career to an end.

The season without trophies in Partizan did not spoil the impression that Zeljko Obradovic left on the Spaniards in Istanbul. He went to Juventud and, like Partizan, won the European title in the first year, the second of his nine.

Partizan was closest to repeating Obradović’s feat in 1998, when Milovan Kime Bogojević took over the team from Miroslav Muta Nikolić in the middle of the season and took him to the final four in Barcelona in 2010, when Duško Vujošević’s team lost in the Euroleague semifinals after overtime. from Olympiacos.

The partisans are waiting to return to the roof of Europe, and at least one precondition is now there – Zeljko Obradovic returned.

Dialogue with Serbia, the opposition will interpellate Prime Minister Kurti

The curfew is lifted all through Italy