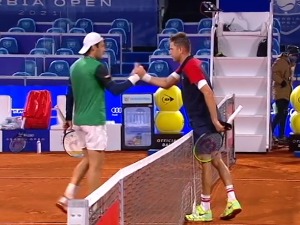 Harder than expected, Krajinović broke the resistance of the Italian in the mood tonight. Travalja was persistent, he managed to defend himself from all the attacks of our tennis player. He managed to come back and win the second set. The opponent had the advantage in the deciding set, but Krajinović had enough strength to make a turnaround and solve the match in his favor.

The first set brought a great fight from the very beginning. Only in the first game, Kajinović met the break ball on his serve, defended himself and no longer allowed the opponent to threaten more seriously in the first set.

Philip constantly pressed the opponent’s service in the sixth game, he missed one chance, in the eighth two, and in the twelfth he managed to use the third break opportunity and put an end to the first set – 7: 5.

Krajinović continued to press the opponent’s service in the second set as well, and in the sixth game he managed to win three tied break opportunities, used the second and took the service away from the opponent for 4: 2.

When it was expected that Filip would calmly bring the match to an end, Trvalja played after the game won with zero, he took away the service of our tennis player, at the moment when Krajinović served for the match. The Italian tied the third game and equalized at 5: 5, even though our tennis player had a match ball.

The Italian uses the drop in the game of our tennis player, takes away his serve again and takes the lead – 6: 5. Then he easily won his serve, and thus the second set – 7: 5.

Krajinovic failed to return to the match. He managed to win the introductory game of the deciding set, and then the opponent tied three games, with one break, and took the lead with 3: 1. Then Travalja missed the chance for a double break advantage, Krajinović defended himself and won the game.

In the second round, the Serbian duel Nikola Milojević – Filip Krajinović awaits us.