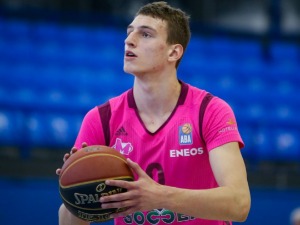 As it was announced on the club’s website, junior Mege, who this season picked up almost all possible MVP awards in the junior competition and in the meantime made his debut for the first team, signed a multi-year contract.

“I have been in Mega for three years through the selections of cadets and juniors. I am very satisfied and grateful to all the people in the club for the trust and the chance given to me. We have achieved a lot with our work and hard work, especially this year and I am very proud I am looking forward to continuing my development in my Mega club, “Jovic said after signing the contract.

Jovic was born on June 9, 2003. in Leicester, England, is 208 centimeters tall and plays in positions three and two.

He joined Mega in 2018, as he previously won the Mini Cup for pioneers as a guest with Mega, and then he won the title of Serbian champion in the first season with the cadets.

Last season, he was the first with the juniors at the moment of the interruption of the competition, while this season he won the junior ABA league, Roda Junior League of Serbia with the juniors, with a triumph at the Euroleague qualifying tournament in Zeleznik.

He won the award for the most useful player in all the mentioned tournaments, and at the F8 tournament of the Junior Euroleague in Valencia he recorded great games with an average of 18.7 points, 9 rebounds and 6.7 assists with an average usefulness index of 25.7

In February, Jovic made his debut for the first team of Mega in the Radivoje Korac Cup, while in the ABA league he averaged 11.8 points, 5.5 rebounds and a usefulness index of 15.8 in 24.3 minutes.