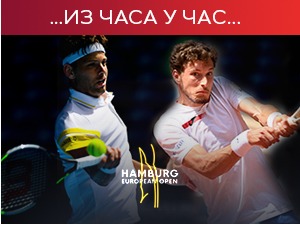 The end, the victory of Karen Busta in the final

The Spanish tennis player kept his serve until the end, winning the second set with 6: 4 and came to the title in Hamburg.

Spaniard on a point from victory

Krajinovic is on the verge of defeat, serving to stay in the match – 5: 3.

Busta is safely heading for the title

The Spaniard continues to play very well, not allowing Philip to get a break opportunity at all. 4: 2.

First point for Philip in the second set

In the third game, on his service game, Filip won the first point in the second set of the final and reduced it to 2: 1.

A new break for Busta, Filip in an increasingly difficult situation

Already at the start of the second set, the Spaniard makes a break and comes to an advantage of 1: 0.

That the Spanish tennis player gains an advantage in the Hamburg final after two breaks – 6: 2.

Although he stabilized a bit after the first break, Krajinović lost his serve again in the seventh game and allowed the Spaniard to serve to win the first set – 5: 2.

Busta uses the first break ball in the third game and comes to a 2: 1 advantage.

The players opened the match with points on their serve

Both tennis players won the first service games in the final – 1: 1.

Krajinovic first on the service

Philipp will try to crown a great week in the German city with a title in the 250 category tournament.

However, the opponent in the final is not easy at all. Karenjo Busta currently ranks 13th on the ATP list and also wants the title.