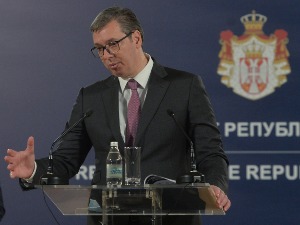 Aleksandar Vučić said that he would have several meetings on Sunday, after arriving in Brussels, while on Monday he will meet with the President of the European Council Charles Michel, a special reception and a long meeting with Josep Borrell, as well as a reception with EC President Ursula von der Layen. .

He will also talk with Special Envoy for Dialogue Miroslav Lajcak, Accession Commissioner Oliver Vahrei, as well as representatives of the EP and other institutions from Brussels.

“It will be hard days for us, but I believe it is important for Serbia,” Vucic said.

The President also said that he expected the continuation of the dialogue with Pristina in Brussels in May.

After that, he adds, he expects, also in Brussels, a meeting of the entire Western Balkans.

“We will go to Brussels many times in the next three to four weeks,” Vucic said.

He said that, of course, it will not be simple and easy on all issues, especially in the dialogue.

“But it is important that we show determination, we fight for a solution, not to enter into a dialogue in order to fulfill formal conditions, but not to leave problems to our children,” Vucic emphasized.

For tango, he says, it takes two, and he underlined that success does not depend only on us.

Vučić announced that in the coming days there will be important events, the opening of important factories, sections of highways.

Angelina Jolie tells how she damaged her career, divorce with Brad Pitt

KLI: Law on Mediation is not being implemented, the justice system violates the rights of the parties – Latest News