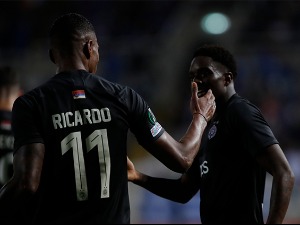 Partizan players in Nicosia played an excellent match, almost routinely defeated Anorthosis with 2: 0 and won three points and started the competition in the group stage of the Conference League.

Black and whites dominated in all segments of the game, created many opportunities, and only the goalkeeper of the home team Lori deserved that the triumph of the Belgrade team was not more convincing.

Attempts by the guests were rare, and every time either the defense or the young goalkeeper Popović was in the right place, so it seems that the black and whites would not have conceded a goal even if it had been played for 180 minutes.

Partizan was especially dominant in the first 45 minutes, when Miljković and Šćekić missed good chances, that is, goalkeeper Lori was in the right place.

However, the black and whites came to the advantage in the 42nd minute, when Quincy Menig scored his first goal in the Partizan jersey.

The Dutchman sent an excellent attack on his team, Markovic shot, Loria defended, and Menig put the deduction into the net.

Anorthosis coach Temur Kecbaya tried to change something on the field with changes and, true, the home team seemed a bit more serious in the first half hour of the match.

But, then the best scorer of the black and whites this season, Ricardo Gomes, came on the scene, who showed his skill in the penalty area of ​​the rival and shook Loria’s net with a strong shot.

Aleksandar Stanojević made changes in order to rest some players for the week, when the black and whites are expecting an “eternal derby” with the Red Star.

However, the black and whites could be worried about the condition of Ricardo Gomes, who left the game at the end of the match due to injury.

The black and whites could have won more convincingly in the finish if Holender and Jojić had been more precise, but the misses did not spoil the overall impression that Partizan left in Nicosia.

Partizan is first on the table of Group B of the Conference Conference with three points won, the same as Ghent, which celebrated with a minimal result against Flora in Tallinn.

The next match in Europe will be played by the black and whites on September 30, when the Estonian Flora arrives in Belgrade.

Berisha’s goal is canceled in the end, Fenerbahce returns with a point from the trip to Frankfurt – Latest News