Pixie’s Serbia flies with Mitrovic’s wings, stopping errors and elevating the fingers of the nationwide group 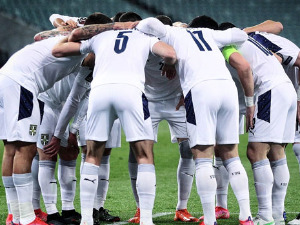 In the first round against Portugal, the opponent proved that he is a tough nut to crack on a tooth and be left without a point.

It was known that Serbia was waiting for a new “mining”, a chess fight and countless duels with an opponent who would primarily defend himself as he knew how, to wait for 90 long minutes to prove on the field that he was better and scored three important points.

Azerbaijan has traditionally tormented, annoyed us and made us wonder if we are worthy of the top of European and world football at all.

And it went well in that challenge. In the early phase of the match, Tadić found Mitrović in his own way, and he so routinely and simply tightened the ball and sent it behind the goalkeeper of the home team.

It seemed as if Dragan Stojković’s chosen ones were fully aware of the opponent’s limit and the formula by which such an opponent is defeated.

Until the goal, and then shortly after that, Serbia played as it should and had the end of the game in its legs.

Certainly in handing over the ball, building from the back line, simple but meaningful passes to send the ball to the creators, and they then with one or two quality moves, threw the opponent’s defense out of the comfort zone, gained an advantage and then used that advantage at the end of the action.

However, for who knows how many times and for who knows what reason, Serbia started with mistakes and huge oscillations in the game.

Azerbaijan based its game on defending their goal, and when they received it, they had to get out of the pattern and start experimenting and doing things from the backup plan, far from being capable of such a thing.

Instead of using that to make an advantage, create more chances, score at least one more goal and be a tailor of its destiny, Serbia allowed the opposite scenario.

Although she had the ball more in her legs and was more dangerous for the rival’s goal, our selection started to make mistakes in basic things, losing the ball, but also self-confidence.

As time passed, and especially after the goal, a huge dose of pressure and nervousness was noticed, which was reflected in insecurity in the legs and head, so bad things could be suggested.

And when it comes to the goal conceded, it is amazing that the “eagles” directly helped the opponent with every goal conceded in this qualifying cycle.

It is known that the teams led by Dragan Stojković have always been at least a little fussy in defense, but that should not be the case in the national team, which is rich in very capable and talented players in those positions, so the “eagles” will have to work on defensive and concentration in the same.

However, national football is very specific and differs greatly from club football, so even the best and highest quality national teams often do not play masterful, fluid and wonderful football to watch, and they always justify the roles of favorites.

Far from Serbia looking and playing badly, or achieving a bad result, but unlike the best and highest quality ones, Serbia has no room for mistakes, since it has made them in the past many years.

The best scorer in the history of this country has grown old to the point that he would start an avalanche and a burden that our national team members would bring out in pure doubt.

Mitrovic has shown for the umpteenth time that football can look like the most beautiful and simplest game in the world. He scored the first goal with his right foot with two contacts, the second with his left with one and thus sealed three points against Azerbaijan.

The huge contribution of Sergej Milinković Savić, who was most likely the best player on the field after “Mitrogol”, must also be emphasized.

During the entire match, SMS proved in the best way how important the “processing” of the ball is for modern football, along with the timing and correctness of decision-making, and largely justified the millions who stand next to his name on the football market.

And Mitrovic does what he knows and knows best. He shakes the nets in the national team jersey and does not intend to stop.

The fifth goal in three qualifying matches and the 31st in the last 32 matches in the national team are really unreal statistics and it is modest to say that Mitrović carries the entire national team on his back and that he deserves the most for the big seven points in three matches.

Considering that this is done by the player who found himself under the biggest blow of criticism after the game and the missed penalty against Ireland in the Euro qualifiers, as well as the extremely bad minutes and club form, that gives a special charm and magnitude to Mitrovic’s success.

Serbia came to the second victory, and in three games in the qualifications for the World Cup, it does not know about the defeat.

Dragan Stojković Pixie does not have a magic wand, so we still do not need to google how much the ticket and accommodation for Qatar cost and who will be our opponent in the group stage at the WC.

However, what is inevitable – changes are noticeable in Serbia, a couple of games with a favorable result are tied, and all that is enough for self-confidence to grow, the atmosphere to boil and to build a team that finally acts as a team, not a group of individuals.