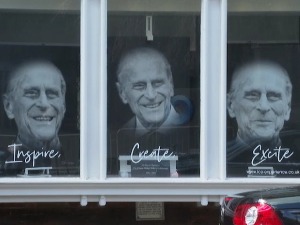 The British spent a week of mourning in re-examining their own history through the prism of the life of the Duke of Edinburgh and his service to the people and the Queen, which lasted over seven decades. For the royal family, the mourning will last for two weeks.

The surveyed citizens say that they wanted to pay tribute to the duke, but also that they are sorry for the queen because she lost someone with whom she spent her whole life.

“She must be desperate, like all of them, because after all, they are just one normal family,” says one woman.

And those who did not know much about Prince Philip in the previous days could learn about him by watching programs about his life.

“He was a joke. He was fun and full of spirit. Yes, he had his gaffes, but it also depends on who understood it all. A wonderful husband, father, grandfather and great-grandfather and an example for all of us,” says one girl.

In Windsor, everything is ready for the departure of the exiled Greek-Danish prince and hero of the Second World War with the longest tenure of a sovereign’s husband in history, for the last time to the chapel of St. George in Windsor, where he will be buried in the tomb of the royal family.

Due to the pandemic, only thirty members of Prince Philip’s family, including its German branch, will attend the funeral.

For the media, the most important thing is that the grandchildren, Princes William and Harry, will not accompany their grandfather by walking next to each other, as they did at the funeral of their mother, Princess Diana.

The end of Prince Philip’s life represents the beginning of a re-examination of the role of the monarchy in Britain: do the people want a king after the queen and should the reign change?

Does she still love her husband Kaltrina Selimi?