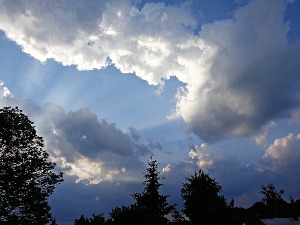 It has been raining in Vojvodina since the morning hours, and weather disasters, stormy wind and hail are also possible.

The clouds are slowly mixing and the south will cover only in the evening. Morning temperature from 17 to 24 degrees, highest daily from 27 in the north, to 38 in the south.

Clouds, occasional rain, showers and strong wind have been in Belgrade since the morning. Temperature up to 30 degrees.

U Friday partly cloudy, in central and southern areas with occasional rain or local showers with thunder. Afternoon gradual lightening. Wind weak and moderate, strong in the east and in the mountainous areas, northwest. Lowest temperature from 16 to 19, and highest from 24 to 28 degrees.

The first day of the weekend mostly sunny and a little warmer. Wind weak to moderate northwest. Morning temperature from 14 to 19, highest daily from 27 to 32 degrees.

U Sunday mostly sunny and very warm. Wind weak to moderate northwest. Morning temperature from 14 to 19, highest daily from 30 to 36 degrees.