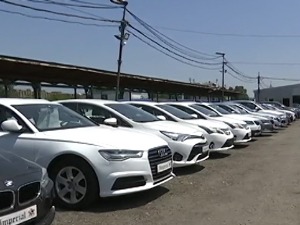 Vehicles are on average 17 years old on our roads, so it is not surprising that their owners were afraid that they would not pass the announced, stricter technical inspections.

The goal is to find younger vehicles on Serbian roads that will meet environmental standards.

Most drivers who buy used cars say that they decide to do so, of course, because of the price.
And lately, the price of used cars has been jumping.

The reason for that is the lack of new vehicles whose production has slowed down due to the lack of built-in parts coming from the Far East.

Analyst Dusan Cincar explains that the vehicles used to be delivered in a month or two, and that now the production has been moved to seven or eight months.

“Therefore, as soon as there are no new cars, the price of used cars increases throughout Europe. As a system of merged courts, the price in our country has increased by ten to twenty percent in the last year,” says Cincar.

The decline in interest in buying cars is due to the poor financial situation of citizens, which was also affected by the pandemic.

The offer on car parks is large, and the average age of vehicles is around ten years. Vehicles, used for up to five years, are also sold by dealers.

“As any change has an effect on the car market, so it can be seen on our website. When I, as an individual, sell my car somewhere, I have the idea to buy a newer car,” said Romana Ranković from the “Used Cars” website.

Dušan Cincar points out that people are eager for new cars, but they can’t afford it, so they are looking to afford what they can, which are used cars.

World trends, regardless of whether new or used cars are bought, are also changing the picture on Serbian roads.

“Customers, who used to buy smaller vehicles, are now opting more for SUV models, and we are even slowly seeing some inquiries regarding electric vehicles,” says Vuk Malović from “Grand Motors”.

Regardless of the changes in regulations, more favorable credit conditions, salary increases, as well as a larger offer of new vehicles, citizens who want to change their car still most often decide to buy four-wheelers older than ten years.