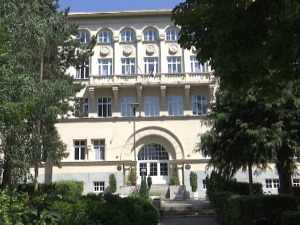 Three years after the liberation from the Turks, the Gymnasium in Vranje was founded in the building of Pasha’s konak. Originally called “Nemanjina”, then “Vranjska”, then “Higher Mixed High School”.

“Vranje Gymnasium suffered together with the Serbian people in this area of ​​occupation of other nations, in the First and Second World Wars, but at the same time emerged victorious, that is, it worked, continued and will continue to educate the young generations of our country,” said Nenad Stojiljkovic. professor of history at the “Bora Stanković” Gymnasium.

It is unique in that in 140 years of existence, due to the world and Balkan wars, it has educated 130 generations. This year marks the 90th anniversary of the beginning of the construction of the current building, an architecturally and aesthetically recognizable building.

There are seven bas-reliefs on the building of the gymnasium, which says that they are the greats of Yugoslav literature. Knowing that the gymnasium worked with full energy, so to speak, in the time of Yugoslavia, for this reason this ceremonial academy is called “Greats speak”. , said Suzana Mišić Stanković, director of the Gymnasium “Bora Stanković” in Vranje.

In addition to the ceremonial academy in the theater hall, an exhibition on the work of the Gymnasium was prepared, 125 photographs.

“It has always been a synonym for broad education, free-thinking and great deeds, both of professors and high school students,” said Dr. Slobodan Milenković, the mayor of Vranje.

“There are few high schools in the country that gave two participants at the Peace Conference in Paris in 1919. It is one of the most famous ethnologists Tihomir Djordjevic and Miodrag Ibrovac who was both a high school student and a professor at the Vranje high school,” says Tomislav R. Simonović, author of the exhibition and chronicler of Vranje.

The Bora Stanković High School is preparing an Encyclopedia of famous people who attended or taught at the school, including eight academics.