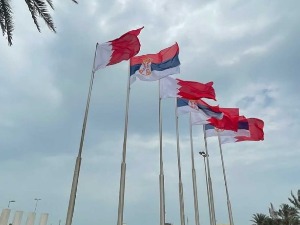 President Vučić is in Bahrain at the invitation of King Hamad bin Isa al-Khalifa.

He previously said that Serbia has never had developed relations with Bahrain, but that now they will be established.

“Bahrain is not a big country in terms of size, but it is important and rich. I believe that we can gain a lot in that cooperation,” Vucic stated.

He announced that a Memorandum of Understanding on cooperation between the two countries would be signed and an agreement reached that the King of Bahrain would visit Belgrade soon.

He also pointed out that both Bahrain and the UAE sent full planes of humanitarian aid to Serbia during the crisis caused by the coronavirus.

Vučić was in Abu Dhabi yesterday had talks with the Crown Prince of Abu Dhabi Sheikh Mohammed bin Zayed Al Nahyan, as well as with the Director of Security and Prevention of the National Emergency and Disaster Management Authority, Dr. Saif Aldaheri, on models for managing the crisis caused by kovid and the immunization process.

After the meetings, in a statement for RTS, he said that he agreed that, together with the United Arab Emirates and China, in Serbia produces coronavirus vaccine of the Chinese company “Sinofarm”.