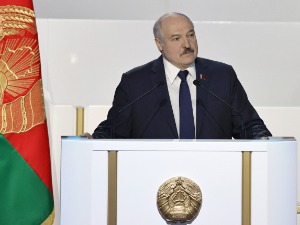 The report states that the FSB of Russia, together with the Committee of State Security of Belarus, as a result of a special operation, suppressed the illegal activities of Zenkovic Yuri Leonidovich, who has dual citizenship of the United States and Belarus, as well as Belarusian citizen Fedut Alexander Iosifovich.

According to the intelligence agency, they planned a “military coup in Belarus according to the elaborated scenario of” colored revolutions “with the participation of local and Ukrainian nationalists, as well as the physical elimination of President Lukashenko.”

According to intelligence agencies, Zenkovic and Feduta consulted with certain individuals in the United States and Poland. “It is significant that the opposition chose the day of the Victory Parade in Minsk on May 9 this year as the date of the military coup,” the FSB said.

They noticed that “ideologues of the Belarusian radical opposition” Zenkovic and Feduta organized a discussion on the plan of the armed uprising in Belarus in private chats and decided to hold a secret meeting in Moscow with opposition-minded generals of the republican armed forces.

“After Zjankovic’s arrival in Moscow, after consultations in the United States and Poland, the scheduled meeting was held in a separate office of one of the capital’s restaurants. During the meeting, the conspirators told the Belarusian generals that in order to successfully implement their plan, practically the entire leadership should be physically eliminated.” it is stated in the announcement.

Zenkovic and Feduta, according to the FSB report, had a detailed plan for a military coup, the occupation of radio and television centers and the blocking of institutions.

“A complete shutdown of the Belarusian power system was being prepared in order to prevent the government from acting. It was assumed that some armed formations (” partisans “) stationed in the so-called” hidden bases “would start operating,” the security service said.

The ultimate goal of the conspiracy, it is added, was to change the constitutional order by abolishing the presidency and imposing a new leadership of the country.

After the meeting, the conspirators were arrested by Russian security agencies and handed over to Belarusian partners who are investigating the case.

After the triumph in the King’s Cup, Real Madrid has a special wish for Barcelona – Latest News