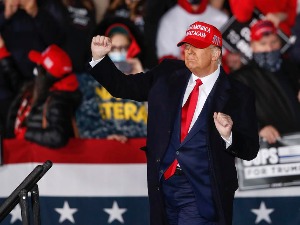 The result of the vote was 57-43, and 67 votes were needed to convict Donald Trump.

That means that the Democrats who voted for Trump’s guilt were joined by seven senators from the ranks of the Republicans. Among them was Mitt Romney, reports CNN.

It was previously agreed not to call witnesses, which shortened the trial.

Although new President Joseph Biden was inaugurated on January 20, a Senate decision would prevent Trump from re-engaging in public affairs – ending his possible ambitions to be the presidential candidate in the 2024 election.

Senate Republican leader Mitch McConnell said Trump was “practically and morally guilty” of provoking the Capitol uprising. However, he also explained why he voted that Trump was not guilty.

As he said, if Trump was still in the White House, he would consider his decision.

She points out that she believes that according to the constitution, the president, deputy president and officials can be legally recalled. But he believes the Senate has no power to convict the former incumbent who is now a private citizen.

This is the second time that an attempt to recall Donald Trump in the Senate has failed.

In December 2019, the procedure of recalling Trump was initiated due to accusations of breaking the law, because, allegedly, he demanded from Ukraine to investigate his rival in the presidential elections.

The Senate acquitted him of the charges even then.

However, Trump is the only president who has been recalled twice in the House of Representatives.