Serbia has no higher good friend than america, Vučić despatched congratulations to Biden on the event of July 4 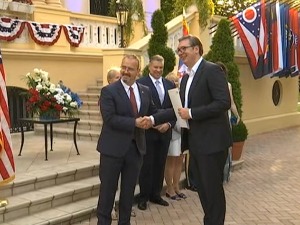 The American ambassador in Belgrade, Anthony Godfrey, organized a reception today on the occasion of the Independence Day of the USA, which was attended by the President of Serbia, Aleksandar Vučić, members of the Government, church dignitaries, representatives of public life and the diplomatic corps.

“Today, when we mark the 245th anniversary of the fathers of our nation declaring the independence of thirteen colonies from the United Kingdom, we are very proud of the special ties with Great Britain, as well as the relations between our great state of Ohio and Serbia,” he said. speech.

Godfrey thanked all distinguished guests from Serbia who came to the US Embassy tonight to mark this important date for the American people and stressed that this year marks 140 years of diplomatic relations between the United States and Serbia, as well as 20 years of successful work of USAID in Serbia.

He also spoke about the history of American-Serbian relations and stressed that they have always been partnership and friendly, except in the 1990s, when they deviated from the right path, and reminded that throughout history, Serbian immigrants like Nikola Tesla or Mikhail Pupin significantly contributed to the size of the United States.

He also said that in the last twenty years, those relations have progressed a lot and are developing further, and he pointed out that, according to him, Serbia has no better friend than the United States.

The American ambassador emphasized that this year was challenging for everyone, and especially for the United States, but that, as he said, this 245-year-old democracy will come out of all that even stronger.

He also said that Serbia faces numerous challenges this year, but that he is sure that they will be successfully overcome with the help of his country, since it is in the interest of the United States for Serbia to become a fully advanced democratic state.

At the end of his speech, in honor of 140 years of Serbian-American relations, which began, as he said, with the enjoyment of Americans in delicious Serbian plums, the ambassador toasted with a glass of plum brandy.

“Every July 4, US citizens celebrate the memory of the struggle for freedom and independence, crowned in the Declaration of Independence, adopted 245 years ago. We, in Serbia, share universal values, embodied in the Declaration, and that is that” all people are created equal and that their inalienable right is the right to life, liberty and the pursuit of happiness, “the congratulatory message reads.

It is added that, precisely because of the idea of ​​freedom and inspired by the belief in truth and justice, Serbia was an ally of the United States in difficult historical moments.

“In the light of the 140th anniversary of the establishment of diplomatic relations between our two countries, such examples of historical alliance should serve as a guide for the further development of our relations,” wrote President Vučić.

He notes that Serbia is committed to stronger cooperation with the United States, which it sees as a partner in all areas of common interest, as well as in facing various challenges of today.

“I am convinced that our friendly relations contribute to peace and stability in the region, which we care about, as well as to the promotion of democratic values ​​we share, for the benefit of a safer and more prosperous world. Let me express my satisfaction with concrete steps to strengthen bilateral cooperation. , such as the opening of the regional office of the International Development Finance Corporation in Belgrade “, it is said in the congratulatory message of President Vučić.

Ahmeti: Hovenier knows Kosovo well, in the future the focus of the US will be dialogue – Latest News