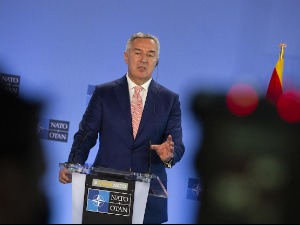 Milo Đukanović said that it was a traditional relationship in which Serbia did not accept the independence of Montenegro, reports Podgorica’s Antena M.

He adds that Serbia has never accepted the independence of Montenegro and reconciled with that, and sees that country as a part of the “Serbian world”.

“When you see Serbia’s attitude in the region, that role is potentially destructive, because Serbia returned to the policies of the early 1990s. Serbia is here to preserve the interest of Serbs wherever they live in the region. That is the same mistake Slobodan Milosevic made in the 1990s, we know. what happened in Bosnia and Herzegovina, “Djukanovic said.

According to him, the President of Serbia, Aleksandar Vučić, is trying to present the protection of the interests of the Serbian people in Montenegro as a legitimate goal.

“And interference in the internal affairs of a country cannot be a legitimate goal. I am sorry that Serbia is repeating its mistakes and I am afraid that this is a realistic potential for creating instability in the region. Serbia is doing it relying on Moscow’s support,” Djukanovic said.

The opinion of many, he adds, is that “Serbia lost Kosovo when Russia was weak, which means that now might be the time for Kosovo to return.”

“Montenegro is very proud of its statehood”

“They want to revive the policies that led to the great loss of human lives in the 1990s,” said Djukanovic.

He pointed out that during the 1990s, Montenegro was the only country in the region that did not take part in the wars, which, he added, was a success, and in addition it received more than 120,000 refugees on its territory.

During the existence of Yugoslavia, according to him, Montenegro was the most underdeveloped country, in order to cross the path from wanting to have a sustainable economy, and fought for independence.

“Montenegro is very proud of its statehood,” Djukanovic emphasized.

No state of the former Yugoslavia, as he said, gained independence without war, and that is why Montenegro is very proud of the fact that it achieved that in 2006 without war.

The President of Montenegro said that the opening of the issue of amendments to the Law on Freedom of Religion was done in the wrong period, before the parliamentary elections, and the Serbian Orthodox Church invested all resources to manipulate the issue in the Montenegrin public and present it in the way it is. she also wanted to “use it as a tool for the realization of Greater Serbia’s interests, and for them to come to power, and she succeeded in that”.

“Regardless of the election result, this phenomenon deserves serious attention. We have a very serious deformity, and that is that the Serbian Orthodox Church has become a political actor in Montenegro. They have become carriers of a very retrograde ideology. Unfortunately, I see something very similar to clerical nationalism.” and even clerical fascism.I have a very fresh memory of the 1990s, when the Serbian Church arrived before the army.They followed the same path – first the church, then the army and, finally, they were responsible for the Srebrenica genocide.The church is a dangerous tool in the hands of retrograde nationalism and we should focus political responsibility and attention on them if we want to eliminate destructive forces, dangerous for peace and stability in the Western Balkans, “Djukanovic said.

“We know to what extent this church works in the Russian national interest. I think that these are all pieces of a big puzzle that is collapsing the European system of values ​​and society,” Djukanovic concluded.