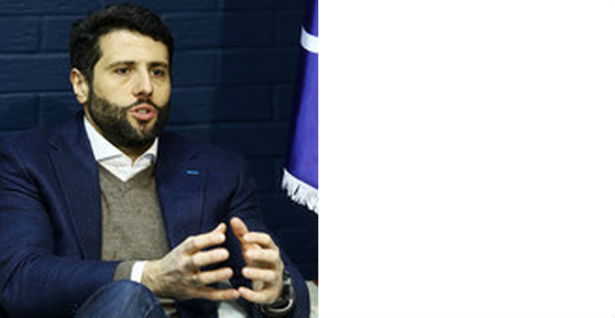 “VUCIC RACKS HIS CAREER BECAUSE OF VACCINES” Sapic: Serbia’s success in vaccination shows that the policy of non-alignment and neutrality makes sense

“In the post-war period, the Hague tribunal served the Western powers to justify their policy. I don’t think anything good about it and I can’t treat any verdict as true,” said Aleksandar Sapic, vice president of the Serbian Progressive Party.

He, as a guest on the show “Hit Tweet” on “TV Pink”, pointed out that he believes that every verdict of the Hague Tribunal has political consequences, and that, regardless of the fact that our country has committed to cooperate with this court, he is of the opinion credibility and that none of his decisions can be treated as true.

– All verdicts of the Hague Tribunal have political consequences. Regardless of the fact that the cooperation of our country with the Hague Tribunal was signed in the 1990s and that we must respect all obligations, after several verdicts against Marcak, Gotovina, Haradinaj, Oric, the general public in Serbia condemned those verdicts as unfair, untrue, which are Contrary to what happened on the ground, there are no more witnesses at Haradinaj, all of them were killed, over 30 of them. If we do not accept that in those cases, as we know that all other verdicts are fair, as we know that any Serb committed a crime, and there were crimes, I am never in favor of bowing our heads – said Šapić

Šapić added that he believes that in the post-war period, the Hague Tribunal served the Western powers, primarily the United States, as an instrument through which they justified their policy, conducted in the 1990s in this area.

– I think that this court has lost all credibility a long time ago, I don’t think anything good about it and I can’t treat any of its verdicts as true. In the post-war period, he borrowed to justify the policy of the Western powers. The United States was against the Serbian people, they are now justifying it with verdicts and nothing has changed – explained Šapić.

“Where are Natasa Kandic now, women in black and” free Europe “

Regarding the cases of beating the boy Nikola Perić (13), when Albanians recently attacked and beat him in the village of Gojbulja near Vučitrn and Dragica Gašić (59), the last Serb woman and returnee in Đakovica, whom they want to expel from this municipality, Šapić stated that it was interesting how our public has reacted now.

He compared the attacks on Serbs in Kosovo and Metohija to an event from a few years ago, when a couple of dozen guys shouted slogans in front of the “Don Jure” bakery, reacting to provocations and highlighting his brother’s Albanian symbols.

– Then they jumped on my head because I commented on it. His native Bart was photographed at that time, showing Albanian symbols and provoked, and then some guys appeared who shouted slogans in front of his bakery, insulted, which I do not support, we should not insult anyone – said Šapić and added:

– First he said that he was not his brother, so that he was a distant relative, it turned out in the end that he worked for him until three months ago. In one part of our media, it was a chase, literally as if we hung it on the Republic Square, because 30 guys gathered in front of the bakery and shouted slogans because they were provoked. I said then that I do not support it, I think that Belgrade was open to all people, all religions and nations even in the most difficult times, and indeed if there is a cosmopolitan city, it is Belgrade – he said.

Sapic stated that this case was in the media every day, and that now there are no such reactions, when Serbs are endangered.

– Where is Natasa Kandic now, Sonja Biserko, these non-governmental organizations, women in black, white, blue, this free Europe, pro-Western media. It only bothers us when someone who is not of Serbian nationality is endangered. I absolutely agree that we should not divide people by nationality, no one in Belgrade should lose a hair. But, are we going to pretend to be dead now, and we are going to whine about Don Juri, so they go there to defend him, to eat burek – Šapić asked.

About Milanović and the European path

Asked to comment on the statement of Zoran Milanovic, the president of Croatia, who recently said that “Serbia should decide whether it is for the EU or for Moscow”, Shapic stated that the Croatian president’s actions do not contribute to improving relations between our countries.

– He said that we have to decide which chair we will take, Washington, Brussels or Moscow. I don’t know if he was bothered when Croatia sat on several chairs in the 1990s and bought weapons from Moscow and other former Soviet countries. At that time, they did not mind the Moscow chair, nor the Brussels one when they entered the EU. We should be on the European path, that is our interest, I think it would not be good for Croatia to ask about it, and I am afraid that it will not even be asked – he said.

He pointed out that Zoran Milanović’s actions do not contribute to the improvement of the relations between Serbia and Croatia, which we should work on, and that almost every time he goes public, he seems to want to distance the two countries.

He emphasized that one fact is very important when we talk about the fight of Serbia with the corona virus and the success in the procurement of all four types of vaccines, among the first countries in the world in relation to the number of inhabitants.

– For the first time in 30-40 years, this gave us concrete confirmation that the policy of non-alignment and neutrality, including the war, which Milanović reproaches us for, gave us such results that we came to the epicenter of world attention for the first time. This gave us, for the first time, material evidence that this policy makes sense and should be pursued. What we did was not done by 95% of the countries in the world – stated Šapić.

“Vucic jeopardizes his entire political career because of vaccines”

Šapić also recalled the conversation he had with Aleksandar Vučić, at a time when he was struggling to get vaccines for our citizens.

– I remember that at that time everything was still completely open, the vaccine was waiting, no one could have guessed that there would not be enough vaccine for everyone. At that moment, the president told me that he was not sure that it would be so easy and that he intended to enter into agreements with the Chinese, and that if it was established that the vaccine would be on all sides, we would be able to get it from the west. , that it will be pressure on him from all sides

Šapić pointed out that the political risk that Aleksandar Vučić took on that occasion was huge.

– The only goal was to get vaccines at any cost and I think that at that moment he risked his entire political career, because if everything was fine and the vaccine was in sufficient quantities, imagine how they would label Serbia, as a country that did not want to take Western vaccines but opted for Chinese and Russian. When it turned out that there was none of that, now the policy pursued by Serbia is being praised – concluded Šapić.

Šapić welcomed the donation of tablets to primary school students in Belgrade schools conducted by the city administration, but also stressed that he did not think it was a good idea for them to be a basic tool for students to learn, and that people from the Ministry of Education should consider inserting these devices into the system. education.

– I’ll have to be honest, I’m not sure that’s a good idea. Giving pills yes, they are an integral part of every child’s life today, but to put it in the education system, so that a child of 7 or 8 years old should suddenly learn from it, without books, I think that a process is necessary for that, and I’m not sure that today we are so much ahead of the countries of the world, because in almost all of them textbooks are still the basic means of education. I would like to make a mistake and make it come to life. What will happen if the tablet breaks down, and the parents did not buy the books, how will the student save the lesson. I hope that the people from the Ministry of Education who stood behind that project thought about how it would work – he said.

He reiterated that he made a mistake a few years ago when at first he did not believe that the “Belgrade on Water” project would not be realized, and today it is one of the symbols of the capital.

– I would not be against “Belgrade on Water”, I just did not believe that it would be built, that model seemed quite utopian to me, I thought it would not be realized, and now it is quite clear. I was wrong, I did not recognize the project and then they told me “you gave up criticism of Belgrade on the water.” Today it has become one of the symbols of Belgrade and every citizen should be proud of it – said Sapic.

Ferencvaros coach with maximum respect for Prishtina, leaves the work of goals to the Albanians – Latest News