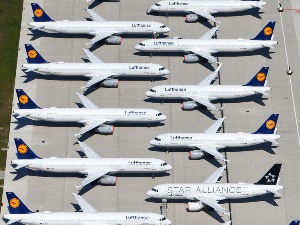 Petar Vojinović, the founder and editor-in-chief of the Tangosiks portal and the organizer of the Aviation Summit of Southeast Europe, said that this year’s Summit was held on May 18 and 19, since it was canceled last year due to a pandemic.

According to him, the coronavirus pandemic was one of the main topics for both the civil and military industries, and many companies dealing with civil aviation were present at the Summit, as well as smaller companies.

“The volume of air traffic has dropped a lot in the past year. One of the managers of ‘Air Serbia’ stated that in the first quarter of this year, the national airline performed quite well. They are at the level of 40 percent compared to 2019, when we are talking about the volume of traffic “, stated Vojinović and added that some European companies are at 35 percent.

He stated that our national company is not so bad and they are financially stable, they received “kovid help” from the state.

“We had a company that deals with the development of drones, which is a popular flying taxi. We also had activities in the military industry where the representatives of the Ministry confirmed that they would continue with the procurement of Airbus helicopter equipment,” said the editor-in-chief of Tangosix.

Vojinovic said that a lot of activities continue, waiting for a bigger return. He says that the “Nikola Tesla” Airport will be presented at the Summit, and that video material will be premiered today.

“Fortunately, a concession was given before the pandemic, so now one foreign company is taking care of the airport,” says Vojinović.

He notes that in the biggest cataclysm for the aviation industry in its history, ETF Airways created its own charter company. They also talked with the representatives of “Air Montenegro”, whose planes should fly in a few weeks.

“Travel is still limited, but the existence of a national company allows travel to larger centers. Some countries have lost national companies. I hope that vaccination will improve travel opportunities,” Vojinovic said.

Tayna shows the physique in the last image, says that her waist has been reduced

Crime against nature does not stop in the Dardania neighborhood, inspectors and police close their eyes