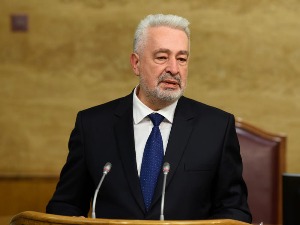 Krivokapic wrote that the deadline for signing the contract would be agreed soon.

“This issue must not be the subject of politicization or subterfuge, in order to achieve a political point. If the Serbian Orthodox Church is satisfied, it is not clear to me that some who present themselves as its protectors are dissatisfied,” Krivokapic wrote.

Milan Knezevic, the president of the Democratic People’s Party and one of the leaders of the Democratic Front, previously called on Krivokapic to sign an agreement with the Serbian Orthodox Church without delay.

“I invite Zdravko Krivokapic to sign a fundamental agreement with the Serbian Orthodox Church without delay, which was delivered to him last week. Time is running out,” Knezevic wrote on Twitter.

Referring to unofficial information, “Borba” announced that the contract was handed over to Krivokapic by a high-ranking official of the Patriarchate of the Serbian Orthodox Church in the Zdrebaonik monastery, in the presence of Bishop Ioaniki.