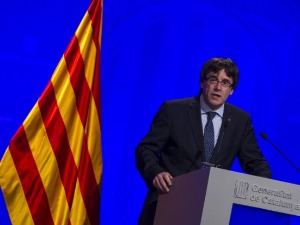 Pujemona, Tony Comino and Clara Ponsati won seats in the European Parliament in 2019, where they received immunity as MEPs, reports AP.

400 deputies voted for the abolition of Pujmon’s parliamentary immunity, 248 were against, and 45 abstained.

Pujemon and several of his colleagues fled to Belgium in October 2017, fearing arrest after referendum on the independence of Catalonia which Spain declared illegal.

Pujamon’s legal team is planning to appeal the waiver of immunity before the European Court of Justice in Luxembourg.

All are the subject of European arrest warrants issued by Spain, which is requesting their extradition in connection with their role in organizing the referendum on independence in 2017, which the Spanish court considers illegal, Reuters reports.

Belgium has so far rejected Spain’s requests. A court in January refused to extradite Luis Puig, another former member of the Catalan government living in Belgium, on charges of misuse of public funds.

Various leaders on the independence of Catalonia have been convicted in Spain on the same charge of rebellion in 2019 and sentenced to up to 13 years in prison.