The FBI falsified testimonies towards a sexual abuser 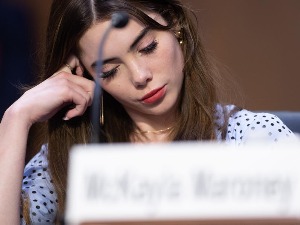 American gymnasts McCalee Maroni, Simon Byles, Eli Reisman and Maggie Nichols testified before the Committee on Justice, which is investigating the way in which the FBI conducted the investigation against Dr. Larry Nasar.

Maroni said that the FBI, after telling its story to the agents in the summer of 2015, did not initiate the case, and that 17 months later, when the case was documented, they made completely false claims about what she said.

“What is the purpose of reporting abuse if our agents take it upon themselves to bury the report,” Maroni asked.

She said that in 2015, she talked to agents on the phone for three hours and told them all the details of her case, which her mother did not hear, including a description of the sexual abuse she suffered during the 2012 London Olympics.

“I don’t want a young gymnast to go through the horror I went through again, like hundreds of other girls before me, because of the sexual abuse of Larry Nasser. I want to emphasize that Nasar is to blame, but also the system that protected him,” the gymnast pointed out.

Simon Byles, a multiple gold medalist at the Olympics, also sharply criticized the American national team and the FBI for allowing Nasar to abuse her and other athletes.

Bureau Director Christopher Ray told the Senate committee that the actions of the agents who conducted the investigation were unforgivable and announced that one of those agents was no longer working.

The investigation against the former doctor of the national gymnastics team, Larry Nasar, began in July 2015, after the president of the National Gymnastics Association, Stephen Penny, reported the accusations of abuse to the office of the Federal Bureau of Investigation in Indianapolis.

The Inspector General of the Secretariat for Justice discovered a series of mistakes by agents in July this year and announced that the FBI, despite the information it received, did not initiate the case for a year and a half, and the testimonies of gymnasts were misreported.

Larry Nasar has already been found guilty in three separate cases and sentenced to a total of 175 years in prison. It is estimated that he sexually abused hundreds of women and girls.

Who is the ‘little bodyguard’ of Fidan Gashi