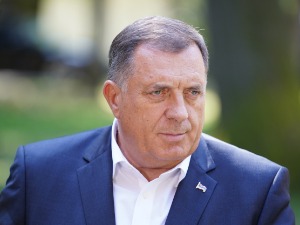 Milorad Dodik believes that at this moment, “all this will be repeated in some way”, if there were opportunities for that, as it was in 1991.

He pointed out that for him, the amount of hatred that still exists is impressive, RTRS reports.

He is of the opinion that almost every day could mark some of the suffering of the Serbian people, as well as that every child should know and learn what the policy of the NDH has led to – kill a third of Serbs, cross a third and disperse a third.

Dodik said that we must not allow basic values ​​to be lost, but gain comfort, and said that we must work on raising awareness of the importance of Republika Srpska “which arose in the blood and freedom that, unlike other peoples, the Serbian people did not teach to the occupiers with open arms “.

“That is why my appeal is here as well – let’s gather around Republika Srpska, which is the only ‘political party’ that is worth it. Everything else is a caricature,” Dodik said.

He also assessed that “no matter how much evil the Ustashas inflicted,” the Serbian people also exterminated the communists.

For the first time, organized attention was paid to children

The Minister of Labor and Veterans’ and Disabled Protection of the Republic of Srpska, Dusko Milunovic, said that the Committee of the Government of the Republic of Srpska for nurturing the tradition of liberation wars has so far established 31 events of national importance, which, as he stated, caused the turbulent history of the Serbian people. war.

“Now, for the first time, we are paying attention to children in an organized manner. 74,642 of them were killed. That is what we know. Only three cities in Republika Srpska have more inhabitants than the Ustashas killed children from these areas,” Milunovic said.

He announced that Šušnjar near Sanski Most will be included in these events, because 5,500 Serbs, Jews and Roma were killed there in a few days without a shot being fired, and the importance, as he emphasized, is even greater because he is in the Federation of BiH.

Bećković: Memory is the only revenge

Academician Matija Bećković stated that the only Serbian geography is “jamography”, and memory is the only revenge, and that the name of the hamlet of Macura in Gornji Jelovac near Prijedor would forever shine on that map, testifying that he was not bypassed by genocide either.

Parastos near the mass grave in the hamlet of Macura, where 312 killed from Jelovac and surrounding villages were buried, including 75 children under the age of 14, was attended by other ministers in the Republika Srpska government, deputies of the Republika Srpska National Assembly, leaders of Potkozarje towns and municipalities. .

They laid wreaths and flowers on the monument.

Labinot Tahiri will run for President of Kosovo, he says publicly when it will happen

Mici: To give our best in Prishtina to make the return match easier – Latest News