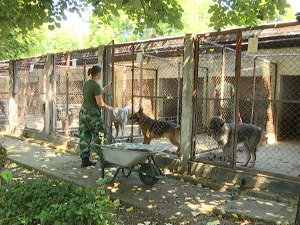 There is no obstacle that would prevent Bana from acting on commands. This German shepherd thus confirms why this breed has been valuable in the Third Battalion of the Military Police for a quarter of a century. In order to be able to defeat the enemy in this way, he undergoes specialist training, which is preceded by preparation.

“We are at the beginning of the training where the guide and the dog gain trust in each other. After that, with daily practice, we come to the execution of current tasks. Trust is 100 percent. And I in him and he in me “, emphasizes the junior sergeant Dalibor Kostić.

A dog trained to find explosives looks completely different on its task. A dog that does not bear the accidental name Pharaoh, as his guide claims, is over 95% accurate in that business.

“When the dog comes and finds the explosive, he sits down and raises his ears and focuses on the very place where he found it. After that, I force him to look further, if the dog does not want to look further, it means that he found it and does not move from that place “, explains Ensign Ivan Stanojković.

In the barracks “Knjaz Mihailo” in Nis, about 200 dogs are trained for the needs of all units. Only for the needs of the Third Battalion, a dozen dogs were additionally trained to, among other things, look for objects, fugitives or missing people.

Thus, the dog, on the basis of the beret he sniffed, singled out its owner from the group of soldiers without a mistake. We also remember some examples when we saw these dogs in action.

“Official dogs were used to find the ‘Malcan Barber’. They were used when members of the Armed Forces were wounded and were used to solve a double murder in Knjaževac. The training of dogs that we use in the Third Battalion of the Military Police lasts for three months for the protection service, and the training for specialist purposes lasts for six months “, states Ensign Srdjan Dubić.

In addition to training, the condition is that the guide and the dog know and understand each other perfectly. That is why, after eight to ten years, which is their working life, in most cases, their guides buy them out of the army.

In the kennel in Nis, service dogs begin their military career. When they turn eight months old, they will meet their guides and gain a relationship that lasts while they are in the army, that is, until they retire.