The primary day of the Parliament confirmed that the trumpet is a miracle! The second day brings extra video games and songs 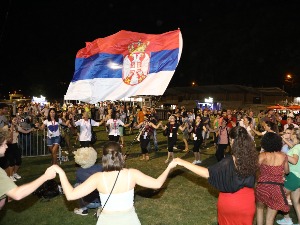 Trumpeters quietly play an old, good folk song. They call for a word, near the Monument to the Trumpeter, in the center of Guča, in the heart of Dragačevo. Guests, parliamentarians, hosts are coming.

The center of the town is crowded and everyone is breathing as one – we haven’t gathered for a long time, in Guca.

“It is a great honor for me to be here among my family, but I also feel a great responsibility towards my father and grandfather, from whom I learned everything. This is Guca, this is Serbia, “Petrovic said.

There was something for fans of the good written word. The Book Fair has opened. For art connoisseurs and art lovers, art exhibitions are also open at the Trumpet Museum.

And that the Dragačevo Trumpet Festival has a future, and that it still has many decades of successful holding and gathering ahead of it, is also shown by the competition of youth orchestras. We got the best in this category:

The first, the orchestra of Stefan Mladenović, Požega.

A round was played, the real, folk! The concert spectacle was held by the Ensemble of Folk Dances and Songs of Kosovo and Metohija “Venac” from Gracanica.

The concert of the trumpet orchestra of Danijela Veselinović, accompanied by Jelena Urošević (violin) and Neda Nikolić (flute), ended the program on the stage of the Cultural Center, the first, very successful, parliamentary day.

How good her trumpet sounds was also shown by the present members of parliament, who returned her to the encore twice, shouting: “More!”

This year, the organizers decided that only the best sound of the trumpet and the masters of their “craft” deserve a place at the Dragačevo Trumpet Festival, and Daniela certainly did.

On the main stage at the stadium, the concert was held by the winners of the 59th Dragačevo Trumpet Festival: Timočki veseljaci, Elvis Bajramović and Siniša Stanković. Immediately after them, Dejan Petrović played with his Big Band, great as always, a real “Dragačevac” on the trumpet.

The trumpet playing in Guca was prepared by trumpet orchestras, finalists of the 60th Dragačevo Trumpet Festival as part of the Midnight Concert. They will fight for the prestigious parliamentary awards at the final competition of trumpet orchestras on Sunday, the third parliamentary day at 3 pm, on the main stage at the stadium.

Program of the second assembly day

That trumpet, Dragačevo, is strange, its sound has magical power. He invites to the trumpet word on the second day of the assembly, when more good music, folk songs and games and concert contents await us.

At exactly seven o’clock, the famous saboteurs will be awakened by the famous, traditional trumpet alarm clock. The ceremonial parliamentary parade of participants through the streets of Guca is scheduled for noon. Within the “People’s All-Around”, the strongest will compete in four disciplines: high jump from the place, long jump from the place, throwing a stone from the shoulder and shooting an apple through the ring.

The best toastmasters will compete in saying the parliamentary and traditional toast, and the most beautiful folk costume, men’s and women’s, will be proclaimed at this year’s Parliament.

The Academic Cultural and Artistic Association “Ivo Lola Ribar” from Belgrade will present a set of games, and then the guests from the Czech Republic, HarMàlek Orchestr, will organize a concert for the members of parliament.

On the main stage at the stadium, from 9 pm, the RTS choir and symphony orchestra under the direction of Bojan Sudjić will have a concert. Afterwards, Ambassador Guca, trumpet master Boban Markovic and his son Marko will play.

At the end of the second day of the assembly, the trumpets of Dragačevo, local orchestras of Dragan Pavlović and Marko Trnavac will be heard.

Bora Zemani amazes with the new photo set, posing in a bikini