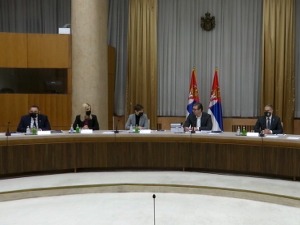 The session of the National Security Council started shortly after 6 pm in the “Serbia” Palace, and it is chaired by President Aleksandar Vučić.

According to the President, the fight against organized crime, vaccination and the fight against the crown, new political circumstances in Kosovo and Metohija, new opportunities in the region, Europe and the world should be discussed at the session.

After the session of the Council, the address of President Aleksandar Vučić is expected at around 8 or 9 p.m.

The President of Serbia stated earlier today that he would a decision will be made tonight to show the footage which show monstrous crimes, and the Prosecutor’s Office for Organized Crime and the Ministry of the Interior will discuss what will be shown.

“It is certain that due to the desire of the parents, we will not show what is the most monstrous, but I believe that something will be shown to people so that we understand what kind of beasts we were dealing with,” Vucic said.

Let us remind you, the president announced last weekend that he would the citizens of Serbia, Europe and the world will be shocked by the details investigations against organized crime.

The session of the National Security Council was supposed to be held last week, but it was canceled due to, as it was said, formal-legal reasons and waiting for additional expertise.

Veljko Belivuk and Marko Miljković were arrested on February 4 on suspicion of organizing a criminal group that committed the most serious crimes by hiding behind Partizan’s fan group.

The Prosecutor’s Office for Organized Crime has launched an investigation against 22 people. All are charged with criminal association, production and trafficking in narcotics, and several are arrested for aggravated murder.