The star outclassed Meg within the first match of the ultimate 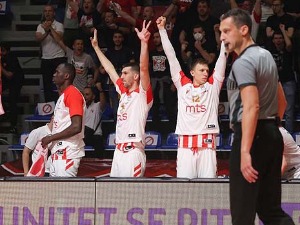 The Red Star basketball players confidently entered the first final duel at home and already at the start of the match secured a double-digit advantage, which they then only increased until the final victory with almost 30 points difference.

At no point was the question of the winner raised, and statistics say that Zvezda finished the match with 56 percent of shots from the game (38/67), 66 percent for two (22/33) and almost 50 percent for three points, 16 threes from 34 attempts.

The convincing celebration of the hosts was only spoiled by the injury of the best scorer of the team, Jordan Lloyd, who injured his right ankle in the third part of the game, awkwardly landing on Kuzmić’s foot after one shot. He left the match with a painful grimace and never returned to the game, and the question is whether he finished the season as well.

The most efficient player of the match was Ognjen Dobrić, who already scored 15 points in the first quarter and provided his team with a double-digit advantage. After the force of the first quarter, which he finished with a triple almost from the central circle, Dobrić hit only one more shot until the halftime, but again with the sound of a siren and unlike 20 points (57:37). In 15 minutes on the floor, Dobrić scored 20 points.

At no point did Mega manage to offer equal resistance to the moody team of the red and whites, and even the MVP and the most efficient scorer of the Adriatic League, Filip Petrushev, remained in the shadows, scoring only 5 points with just two rebounds in just over 20 minutes.

The second game of the finals will be played on Friday at 8 pm in the Mega Faktori hall in the Braće Jerković neighborhood.