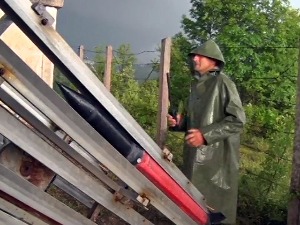 A hail cloud roared over Požega for ten minutes. Fortunately, it was the size of a hazelnut, and the action of anti-hail shooters also contributed to that.

As a result, many anti-hail stations were left without rockets today.

“Since maybe last Thursday, this northern part of us, no station has rockets at the stations,” said Mirko Kovacevic, an anti-hail shooter from Srednja Dobrinja.

Anti-hail shooters also acted in the neighboring municipalities, and the city caused damage in the area of ​​Lucani, Uzice, Pozega.

“As for the damage to potatoes, raspberries, in one part it made a nice walk, and in some places it didn’t, like where. It fell more on some circles, but this move of ours and there towards Srednja Dobrinja was a big storm. In one width maybe three to four kilometers, “said Ratko Pavlovic of Tabanovic.

The storm caused a power outage in some villages and parts of Požega.

In the area of ​​the municipality of Lucani, the city also caused damage to crops, while in the Ivanjica area, heavy rain damaged uncategorized roads.

The extent of the damage is yet to be seen in the coming days.

Jokić continued his wonderful streak and within the victory over Houston, Pokuševski…