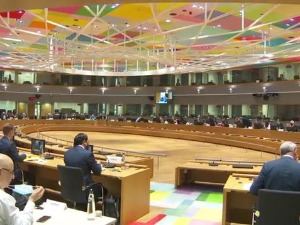 The so-called “non-paper” on “Enhanced EU engagement in the Western Balkans”, which Tanjug had insight into, states that Serbia is expected to accelerate the dynamism of reforms in the country, but also to use the chance to reach an agreement with Pristina.

The text of the document estimates that the authorities in Belgrade and Pristina currently have a “strong mandate”, won in the elections, which “they should use to reach a comprehensive agreement on normalization”.

“Neither side has time to lose,” the text reads. It is added that the EU is working on enabling the continuation of the negotiations between Belgrade and Pristina in Brussels.

Pristina is urged to make “decisive reform efforts” as well as “progress in EU-mediated dialogue” in order to make progress on its European path.

Stressing that it is necessary to “speed up the process of integration” of Serbia, Belgrade calls for speeding up reforms “especially in terms of the rule of law and governance”, but also for “consolidating its geopolitical orientation”.

“More political investment should be invested in that,” the text reads.

The document emphasizes that the integration of the Western Balkans into the EU is “a political, security and economic interest” and “an investment in a stable and proper Union”.

“The Western Balkans has a clear goal of becoming a full-fledged part of the EU and does not want to be satisfied with enhanced economic, trade and financial co-operation,” the text reads. It is added that the citizens of the Western Balkans have a “feeling of deep disappointment” in the enlargement process, which, in the case of Serbia, is due to the slowing down of the pace of progress.

Excavations in Kizhevak, the skulls of two people are found – Latest News