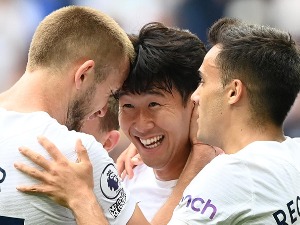 Tottenham fans have many reasons to be happy these days – first, captain Harry Kane decided to stay at the club, and the team is leading the Premier League table after three rounds.

The Spurs are the only team that recorded all three victories in the first three rounds, and it is interesting that all triumphs were won with a minimum score of 1: 0.

In the match against the returnee to the elite, the Watford team, the scorer of the only goal was Son Hyong-Min, who thus scored the second goal of the season, after the goal at the premiere against City.

Kane started the duel against the “hornets”, he managed to earn a yellow card, and the new manager Nuno Espirito Santo showed that Tottenham will be a tough nut to crack this season and that they will finally fight for the championship title, in ever stronger competition.

Watford remained on three points, from the first round when they defeated Aston Villa.

In the second game of the third round played at the same time, Burnley and Leeds played a draw 1: 1.

The home team took the lead with a goal by Chris Wood, and Patrick Bamford brought a point to the team of Marcel Bielsa.

This is Burnley’s first point won in the competition, Leeds has two.

The Wolves and Manchester United will meet in the last game of the third round of the Premier League.

Haradinaj publishes the full list of his candidates for Pristina